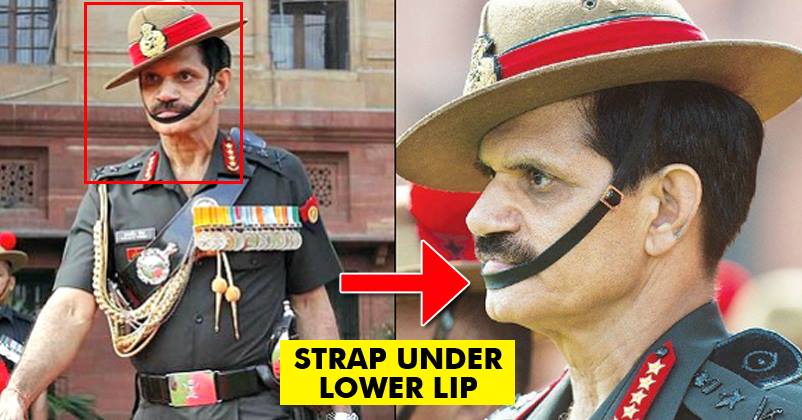 Every single member of Indian Army is like a one man army in itself. There are many regiments in Indian Army whose basic purpose is to serve for India and people living in our country by protecting them from any foreign and internal terror attacks. One such famous regiment is ‘GORKHA REGIMENT’. Known for their fast, efficient and amazing hand to hand combat skills along with lethal attack combinations, GORKHA REGIMENT is one of the finest jewels of Indian Army. One of the few noticing points about GORKHA REGIMENT soldiers, apart from their amazing skills, is that they wear the strap of their hat below their lower lip and not below their chin. Now before some ‘wanabe’ NGO or LAWYER go out to file a complaint against these soldiers for not following the uniform code of conduct, let me remind them of one simple thing. There is a reason behind it. The reason why they don’t wear the strap below their chin. Read further to know the reason.

One of the reasons for wearing straps below their lower lip is because of their height. Soldiers from GORKHA REGIMENT earlier had short heights as they hailed from mountainous terrains and due to their genetics too. Their heights are usually short as compared to rest of the soldiers in Indian Army. This calls for the short strap so as to make them seem equal, as the cap for shorter soldiers do not fit to taller ones. The size of the Cap and strap is not altered for any soldier and is kept same as a Gorkha tradition. Hence, the strap below the lower lip. Another reason is quite funny in its own way. And with this I am not intending to hurt anyone sentiments. Soldiers from GORKHA REGIMENTS were considered to be TALKATIVE. During wars, they would charge into the enemy camps by screaming on to the top of their voices which eventually made them alert of the attack. In order to deal and fix this habit, the length of the strap was kept short so that it would fix right under their lower lip. And in that way, if they tried to talk, the strap would pull up and hence, they couldn’t speak. Some people claim that this habit was inherited from Britishers. They believe that the GORKHA REGIMENT wears the helmet dating way back to the time when British Army wore them.

However, no matter whatever are the reasons, their short height and short straps don’t make any difference when it comes to fighting against the enemies. They serve our nation with full dedication and passion. And as a citizen of my country INDIA, I give them a big salute for their services.

Here’s How Indian Army Planned The Surgical Strike! You Can’t Afford To Miss These Details!
We Bet You Won’t Go To These Popular Places After Knowing Some ‘Dark’ Facts About Them….