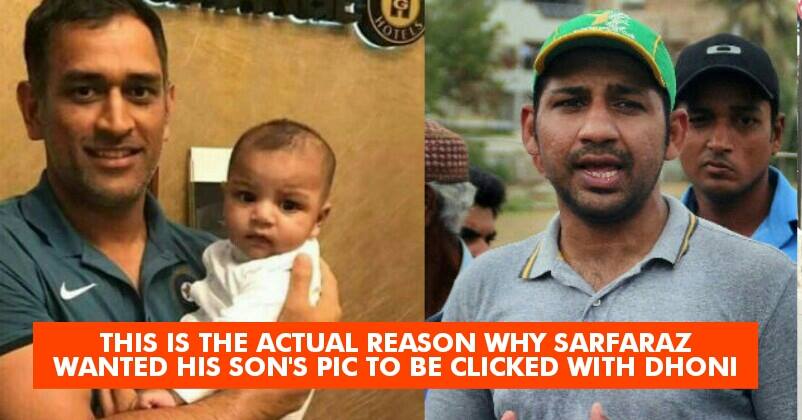 Champions Trophy 2017 is over and India is playing against West Indies right now, but the memories of the championship are still fresh in the mind of players. No matter how intense they look on the field, but outside the match, they always remain friendly and respectful to each other; something i.e. a big sign of sportsmanship. Pakistani Team captain, Sarfaraz Ahmed has become the hero of his country after he led the team towards victory in the final against India. The young cricket star is enjoying the limelight and attention like never before, but the best thing is he has maintained the sanity. Sarfaraz Ahmed has been giving lots of interviews these days, but unlike the media would expect him to do, in none of his interviews he said bad words about Indian team. In fact, in a recent one, he praised Indian wicket keeper batsman and former captain Dhoni for clicking a picture with his son Abdullah. Here’s what he said-

“I was sitting in the lobby with my family. We were sharing the same hotel so once I saw MS, I went after him and asked for a picture of him and my son Abdullah. Once he grows up, he would have fond memories of him, lapped on one of the greats of the game”

Check out the video-

This is real India versus Pakistan friends! I am sure our Media will never cover this! MUST WATCH! ❤ pic.twitter.com/REiGJ0QZXP

You can also watch the video directly here-

Check out some reactions to the video-

Really DHONI is a legend. 👍

Well, this is really heartwarming. We hope everyone talks about this positive side of India and Pakistan as much as they talk about other things. This is probably the only way we can balance out the hatred and spread the love.

People Were Curious To Know Why Mithali Read A Book Before Going To Bat. Finally She Answered
VIVO Retained IPL Sponsorship For 5 Years. The Price They Paid Will Shock You To No End