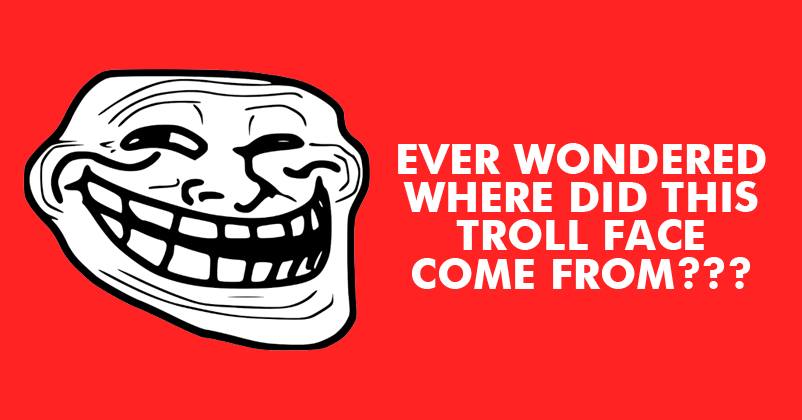 We all know this famous ‘trollface’ which is always seen on social media and circulated widely, isn’t it? Yes, this black and white mischievous face has become an inseparable part of social media posts these days. Be it video games, coffee mugs, T-shirts or comics, you will find it everywhere. But have you ever wondered where it came from? Who created it? Let us give you the answer. This troll face is originally created by Carlos Ramirez, a 24 year old Oakland-based artist. How it all started?

In the year 2008, while working on college paper, Ramirez got bored and scrolled through 4chan, an image board. He drew a random comic in MS Paint and posted it on this image board. Well, he had a habit of randomly uploading everything he drew on MS Paint.
Carlos stated ;

“I didn’t really have any intention to share it,” he told me. “I just posted it on their video game board and I went to sleep. I woke up the next morning and saw it re-posted in a number of other threads.”

Yes, Carlos created this image accidentally. He didn’t have any idea that this drawing of his would be such a hit on the internet and even on popular platforms like Reddit. After this, lot of money and success followed. With this accidental creation, the artist earned a lot of money. Later, Carlos’ mother insisted that he must copyright his creation and once he did that, he started earning a lot of profit for the same.

Due to this popular ‘Trollface’, Carlos has earned a whopping $100,000 till date, can you believe that? Yes, every few months, he makes $10,000-$15,000 from licensing and merchandising of the meme. Moreover, if an unauthorized version of his meme is used, he earns money from that too, in the form of settlements. So what else does a person want? Uploading some random drawing and earning thousands of dollars from the same, isn’t that great?

Judge Gave The Most ‘Unique’ And ‘Hilarious’ Decision To Prevent Divorce! We Bet You’ll Love It!
Here’s What Pen Eraser Is Actually Meant For.!!