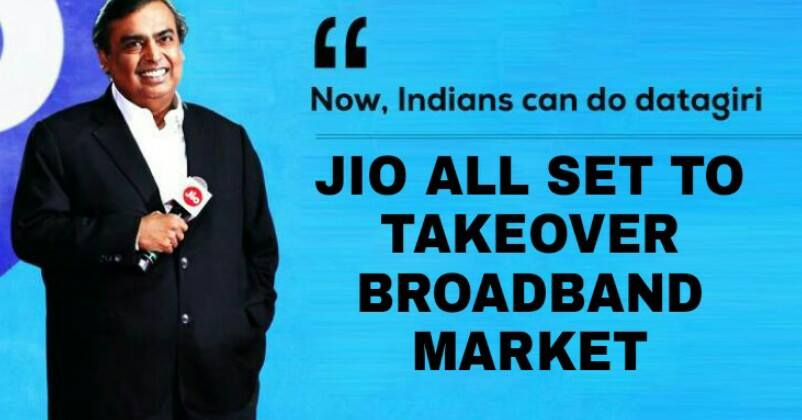 If there is one man who changed the face of the year 2016 for all the internet users in India, it is certainly ought to be Mukesh Ambani where he just disrupted the telecom industry in a single day when he launched his JIO PLAN. When a data deficient country gets something (internet) for free, the plan would definitely work. However, Reliance Jio is back again with yet another bang by rolling out the Jio Fiber service or Fiber To The Home (FTTH) service in Mumbai. Reports suggest that some people in Mumbai have already been enrolled in this service. The finishing of cable installation for JIO FIBER was somewhere finished in early November 2016.

According to one of the users, the JIO FIBER service is giving an insane speed of around 70-100 Mbps which is now free for the coming three months. The service is further expected to be launched in cities like Delhi, Bangalore, Kolkata and Chennai. Even during the time of the JIO launch in September 2016, Mukesh Ambani did emphasize on this plan where he promised to deliver the JIO FIBER – HOME TO OFFICE service at a speed of 1 Gbps that would push the power of data even further. He had said, “This is on par with the most advanced wireline offerings anywhere in the world”.

Since the launch of Jio Sims, their servers are heavily loaded with millions of user and hence this has affected their quality of service for providing a decent good speed, hence they will be banking on WIFI-HUBS for data offloading purposes. They have planned to install around millions of WIFI Hotspot across India in the year 2017. Their JIO FIBER Service has also included special plans for WiFi purposes that will be delivered to schools, colleges and public places This service will serve a great help for connecting different school and colleges across our country for distant education programs.

So what are your views about this news? Isn’t this an awesome scheme? Please share your opinion in the comment section below.

Nokia Sues Apple For Violation Of Patents & Now Smartphone War Will Begin In The Court
Here Are The Top Calling & Data Packages Offered By Various Telecom Giants In 2017! Check Them Out!