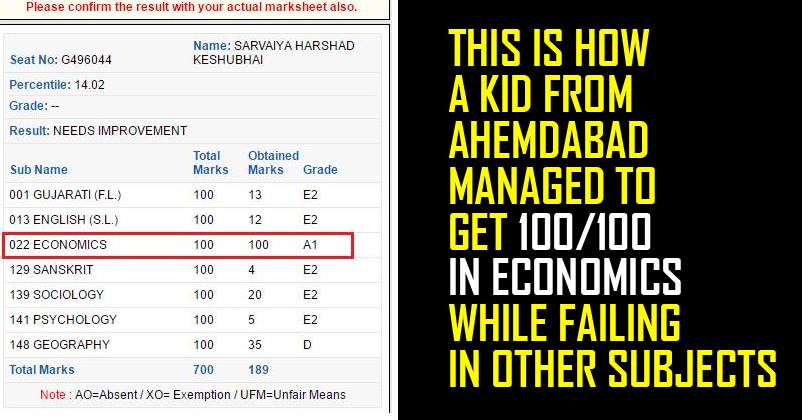 Earlier too we had reported about Harshad Sarvaiya, a class 12th student who scored exceptionally well in Economics i.e. 100/100 and failed miserably in all other subjects! Forgot it? Check the article here!

But do you know what he did? Well, Harshad seems to be a pure genius as he checked his own paper with ‘red ink’ and gave himself full marks before he submitted it to the supervisor.

Well, he did it for 2 subjects, ‘Geography’ and ‘Economics’. However, the teacher who was checking his geography paper noticed his smartness immediately, but the teachers who examined his economics paper failed to notice the irregularity. Yes, so this was the smart ‘Trick’ used by him! All he needed was red-ink to help him fetch ‘out of marks’! He skipped the main page and put his marks on the other supplements, again a ‘smart brain’!

G D Patel, the secretary of GSHSEB stated that to avoid suspicion, Harshad didn’t mark the total on main page. He successfully cheated 7 teachers, who were supposed to check each question and put their signature. However, instead of checking, the teachers just totaled up the paper and gave 100/100 as the final score. Well, he couldn’t escape the software of the board which spotted this irregularity in marks. Reports say that a case has been filed against Harshad and if found guilty, he can be debarred from appearing for exams.

So guys, what do you think about this? Wasn’t the student too smart? If all teachers start ignoring such things, every student would start 100/100 in all subjects. It is the duty of the teachers to check each and every thing perfectly, to avoid such incidents.

How Shane Warne’s Son Is Enjoying With Girlfriend At 15 Will Turn You Green With Envy
The First Record Of Test Tube Babies: The Story Of The Jars Of Ghee