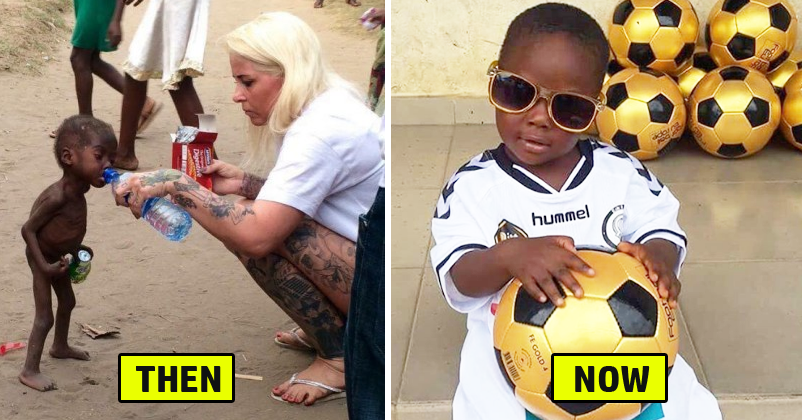 A year back, Anja Ringgren Loven and her husband were on a mission in Nigeria to save those children who were abandoned. Yes, each year, thousands of kids are abandoned in Nigeria and are accused of being a witch.

That time, she met Hope (Named by Anja), a cute little boy who was on the verge of death. He had become too skinny owing to malnutrition and his parents had abandoned him in a small village.

They found him in the village in a very bad condition i.e. naked and weak. They had named him so because there was just a “HOPE” that he survives. He was immediately hospitalized and was given treatment for malnutrition and stomach worms.

That time, Loven had shared a photo of giving Hope some water, and in no time, it had gone viral like crazy. This was done in an attempt to raise some medical help. Remember this picture? Now, it’s been an year and once again the boy’s picture has hit the social media; but wait, this time you won’t be able to recognize him. He’s a healthy kid now and soon he will start going to school. Currently he lives with 35 children in an orphanage which the couple runs in Nigeria. Have a look at some of his current pics…

All set for a new life! Wow, what a transformation! In the pink of health! There were many people all across the globe who donated money to the organization on behalf of Hope. Loven and her husband are now planning to open a new orphanage to rescue other children.

We seriously need such people in our society who are no less than “Life savers”. Hope has got a new and an improved life; thanks to the couple.

7 Facts About Cristiano Ronaldo That We Bet You Didn’t Know!
10 Things Science Has Got Totally Wrong!