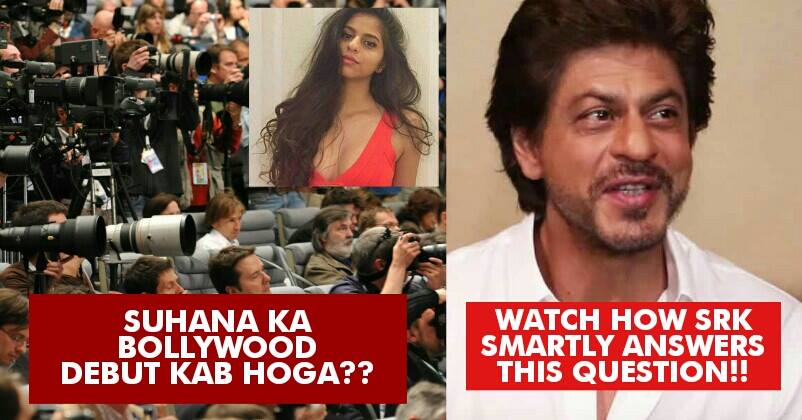 Shah Rukh Khan is one of the biggest stars of Bollywood and has quite a huge fan following in the foreign countries too. Taking into consideration the same, it is obvious that media wants to know each and every happening related to his work, life and family. The kids of Shah Rukh Khan also get a lot of attention from media and nowadays, his daughter Suhana has become the talk of the town. Suhana is making headlines for a good time now; firstly she made everyone crazy with her acting performance in the school play and then media got frenzy when she attended some social events. Later, she made heads turn with her glamorous look at the restaurant launch of Gauri Khan and then she was seen at the screening of Salman Khan starrer “Tubelight”. With the increase in her social appearances, the speculation of her Bollywood debut also got strengthen. However, on Monday, during a press meet, her father Shah Rukh Khan spoke on this matter.

“I have said this very often, going out in public does not mean you want to be an actor. But the point is very clear that and I request everybody with love, I understand it is your job but they are not movie stars, they just happen to be a movie star’s children and I think they are very respectful and decent. When they come out with me I make sure they stand with me and pose because I know it is meant to be important.”

“I request that if you see them publicly two things- first don’t assume that they can handle media frenzy because they get awkward too, and also don’t assume that they want to be actors. So, no, my children will finish the studies. In my house, the minimum qualification is to graduate, otherwise no entry in my home. If they want to be an actor, they will have to study to be an actor. So there is a long way to go yaar.”

So if you were expecting to watch her on the silver screen soon, it is not going to happen. King Khan is presently busy with his upcoming movie “Jab Harry Met Sejal”, which is directed by Imtiaz Ali and stars Anushka Sharma in the female lead role. The flick is scheduled to release on 4th August, 2017.