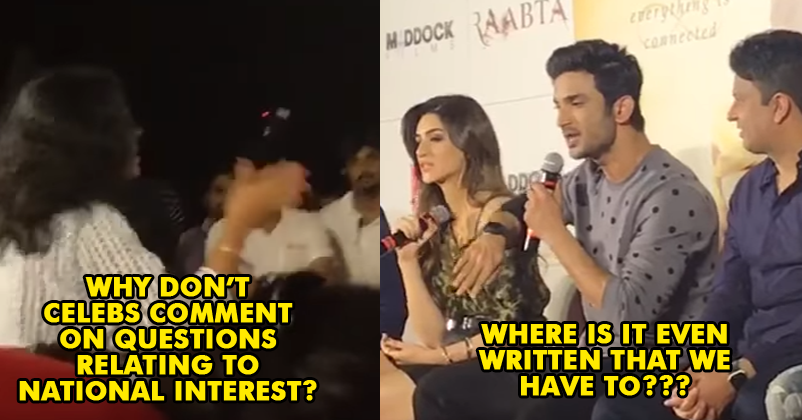 Sushant Singh Rajput and Kriti Sanon were all in a good mood to promote their upcoming movie Raabta. The trailer launch happened today and these two were at their candid best.

What happened at the trailer launch event was a little disturbing. There was one controversial question asked on the political issue of Kulbhushan Jadhav.

Now, we know that celebs have become cautious of endorsing any political opinion because it is often blown out of proportion.

In such a scenario, the celebs present there tried passing on the question. However, one lady at the front row seemed so agitated that she couldn’t take a ‘no’ as a reply.

She visibly forced the stars, specifically Sushant Singh Rajput. First, he was calm with her but later on when she forced him, he got really angry.

He told her, “Where is it written that public figure has to comment on everything?”

Watch the video of the entire issue here:

Now it is quite obvious that if a person doesn’t want to issue a statement on political controversy then why one has to force them? There is no rule as such where celebs are entitled to give their opinion on every and all matters of political, social or economic headlines.

While on a positive note, the trailer of Raabta was really awesome and the chemistry between Kriti Sanon and Sushant Singh Rajput looks promising. We are looking forward to the movie.

Sonu Nigam’s Tweets Have Created Troubles For Sonu Sood! Here’s How People Are Trolling Him!
2 Sardars Did Bhangra On “Saas Bhi Kabhi Bahu Thi” & Even Smriti Couldn’t Stop Herself From Replying