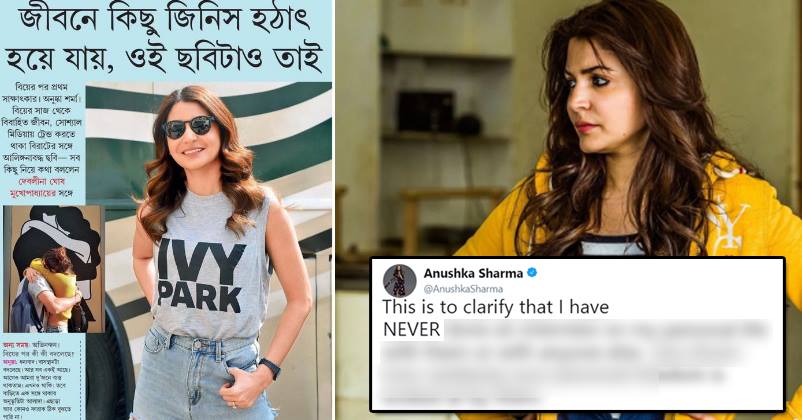 The gorgeous Bollywood actress Anushka Sharma and Indian skipper Virat Kohli got hitched on December 11, 2017, in a private ceremony with the presence of family members and few friends. Subsequently, two grand receptions in Delhi and Mumbai were organised by the newlywed couple after they returned from their honeymoon. 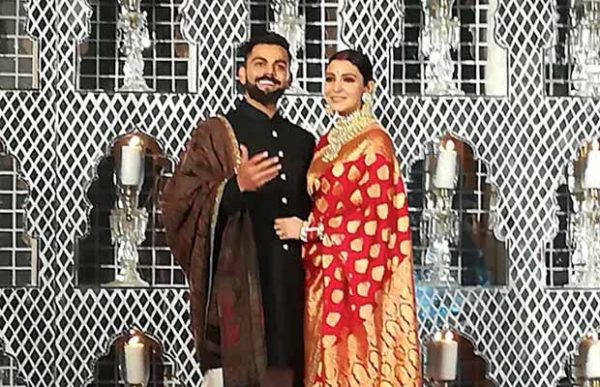 Prior to their wedding, Virat and Anushka never opened up about their relationship; however, they made public appearances and media always made attempts to know when the couple would tie knot. Nevertheless, they didn’t disclose any details regarding their relationship and even after getting married, the couple always maintained a distance with media if they ever tried to peep into their personal lives.

However, recently a Bengali tabloid published an interview with the “Pari” actress in which she’s quoted as saying that the pic in which she’s seen hugging Virat was spontaneous and not a planned one. 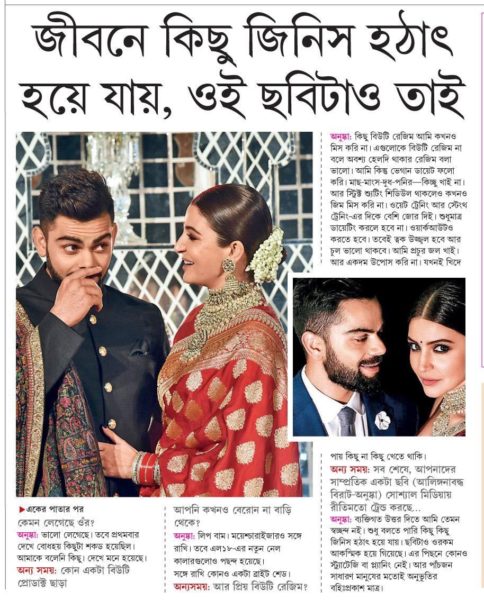 Anushka took to Twitter and slammed the Bengali tabloid in harsh words. She shared the screenshots from the newspaper and wrote, “It is SHOCKING to see a completely fabricated interview of mine in a reputed publication like @Ei_Samay. This is to clarify that I have NEVER done an interview on my personal life with them or with anyone else. Just shows how carelessly your personal freedom is looked at by them.”

It is SHOCKING to see a completely fabricated interview of mine in a reputed publication like @Ei_Samay. This is to clarify that I have NEVER done an interview on my personal life with them or with anyone else. Just shows how carelessly your personal freedom is looked at by them. pic.twitter.com/ncmcuuJvVs

As Anushka’s tweet suggests, she has never given an interview to the newspaper and the piece of article published by them is utterly fabricated.

Twitter also slammed the daily for this shameful act. Check out some selected tweets:

They can do anything to earn money:

@TOIIndiaNews Ei Samay being a Times Group newspaper such irresponsible journalism is not at all expected from them, ridiculous it is.

Users demanded a ban on the newspaper:

This is really unexpected from such a reputable Bengali daily. This is one of the best selling dailies in Bengal. Now we got that how they become popular. If this is their strategy to do business then we must ban them.

And I was adoring this thinking wow, such golden words😍. Turned out to be fake in the end 😠

They should be penalised:

Twitterati asked Anushka to sue them:

Only tweeting about this won't help much..Sue them…they did that for cheap publicity…sue them fetch good money from them they will be on track..

@Ei_Samay Shame on you..!! Cooking up stories just out of thin air.. no respect for privacy..??
now have some decency to apologise..!!

Is this called freedom of speech?

And now you will use 'freedom of speech' like this??@Ei_Samay #ShameOnYou