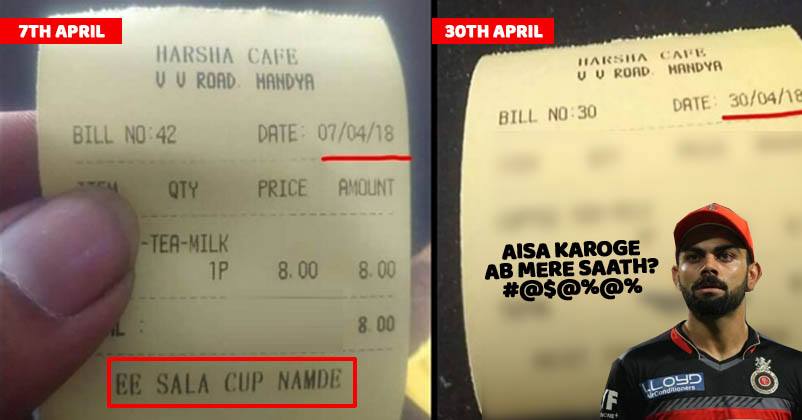 RCB fans are extremely disappointed because the team is not performing good at all; there are very less chances of it winning the IPL cup.

People are making fun of RCB’s tagline “E Saala Cup Namde” which translates to “This year, cup is ours”. Social media users keep trolling RCB with this tagline whenever they lose matches.

People are even feeling pity for Virat Kohli because he’s giving his best and still, not able to enjoy the win. Amidst this, a restaurant in Bangalore “Hasha Café” brutally trolled RCB over their performance in the tournament.

Looks as if the café’s owner has realized that there are hardly any chances of RCB winning the cup this year; on 7th of April i.e. when the tournament began, the tagline on the bill was “E saala cup namde”

However, after seeing the performance, they changed the tagline to “Next saala cup namde” on 30th of April. This means, “Next year, cup is ours”. Does this mean that fans have lost all hopes this time?

Here’s the bill that someone tweeted;

LOL, this is surely going to disappoint RCB players, especially

Continue Reading
You may also like...
Related Topics:Bill, RCB, Trolls

On Anushka’s Birthday, Virat Posted A Special Love Message & It Shows How Much He Loves Her
Virat And Anushka Watch Avengers Infinity War Together. Whole Mall Came To Stand Still