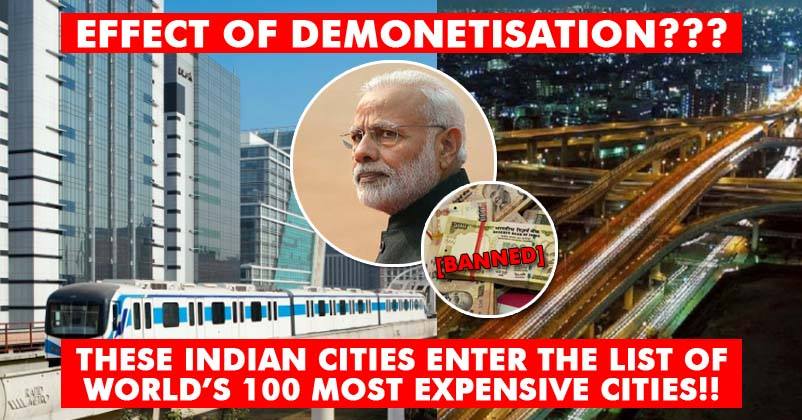 A few days back, we shared the list of World’s most beautiful cities as per Mercer’s survey. Well, none of the Indian cities could make it in the Top 100.

But in the new list by Mercer which rank cities considering the cost of living, our 2 cities have made it in the Top 100 and guess what, Mumbai is the most expensive city in India which stands on 57th rank. Yes, Mumbai has come out to be the most expensive Indian city in Mercer’s 23rd annual Cost of Living Survey, outpacing even major global cities such as Paris, Canberra, Seattle and Vienna.

Another one is national capital Delhi, which stands at 99th rank and is a new entry. Interestingly, Delhi ranked at the 130th place last year and has jumped 31 places.

An important reason being considered behind this jump is demonetization. Ruchika Pal, India Practice Leader, Global Mobility at Mercer said-

“Residential rental prices increased in Mumbai and New Delhi. Due to demonetization, the real estate sales market has been severely hit. However, the rental market benefitted from the consumers’ sudden withdrawal from the purchase market, thereby putting pressure on rental prices.” Mercer said Mumbai’s jump in ranking is also attributable to the surge in prices of food and personal care. Inflation, amongst the highest in Indian cities, moved from 4.81% to 5.57%, during this period, in Mumbai. Overall, while inflation in India has been maintained, over the last few years, prices of expat food items such as cheese, butter, fish, meat etc have increased significantly. Prices for fruits and vegetables such as onions, tomatoes, lettuce and pineapple have also shown an increase. Mumbai is also the most expensive cities in India on account of transportation, which includes taxi fares, the cost of auto and auto parts as well as running costs.

On the other hand, our neighbour China, has shown nice improvement. China’s Shanghai, which ranked at 7th place last year has dropped by to 8th rank. It’s a serious matter for the government to think that when Shanghai can drop from 7th to 8th rank why are our cities bouncing up in the chart.

Continue Reading
You may also like...
Related Topics:Delhi, India, Mumbai

This Designer Was Slammed For Pairing A Hijab With Saree! His Reply To Haters Is Pure Gold
When You Look At The Pic, It’s Beautiful! When You Zoom In You’ll Be Horrified!