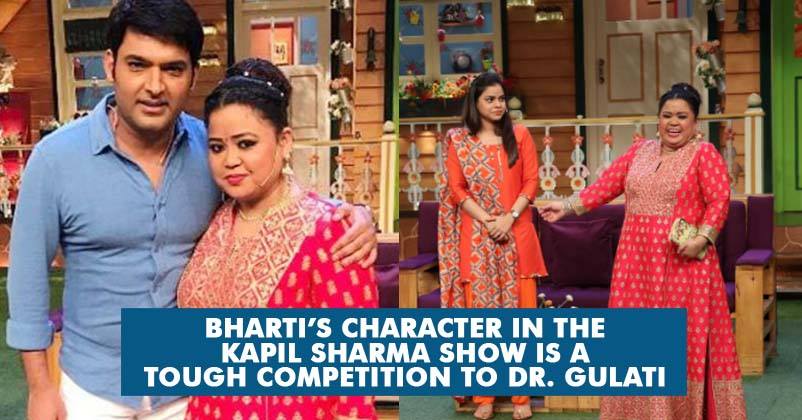 After Sunil Grover’s exit, Kapil is trying out ways to add newness to his show so that viewers remain hooked. We are happy to know that Bharti Singh has joined the team recently; it’s going to be a hilarious laughter ride from now.

Earlier, there were rumors that Bharti Singh was pissed off with the TKSS team and had cancelled the shoot on the very first day. Fans were shocked because Bharti Singh and Kapil Sharma have worked together in Comedy Circus, Comedy Nights Bachao and Comedy Nights and have shared a good rapport.

We too had reported about this tiff, but later, Bharti Singh cleared the air with her official Instagram post. After seeing this post, fans became very excited. However, everyone wanted to know the details of Bharti Singh’s character in the show.

Speaking about her character in an interview, Bharti said,

“It was an exciting day on The Kapil Sharma Show. I played a Punjabi character named Babli who is a boisterous marriage broker from Delhi. It will be fun to see her antics and how she deals with candidates looking for prospective partners”

Woah, a Punjabi marriage broker! That sounds pretty interesting, but wait, there’s more to it. She will be essaying one more character i.e. a bubbly school girl. There’s no doubt that Bharti is a versatile actress and will do justice to both the roles.

“The best part about the show was there was a lot of space and creative freedom offered by Kapil’s team to explore and bring out my character. I look forward to bringing out more characters and am positive that the audience will love to see me and Kapil entertaining them together.” This statement has left us impatient for this episode, which will air tomorrow. Her character looks very promising and is capable of giving tough competition to that of Dr. Mashoor Gulati.

Share your views about this in our comments section below.

You Won’t Believe Which Hollywood Star Is Deepika’s Childhood Crush! We All Had A Crush On Him
Akshay Kumar’s “Toilet: Ek Prem Katha” In Legal Trouble! A Stay Can Be Put On Its Release!