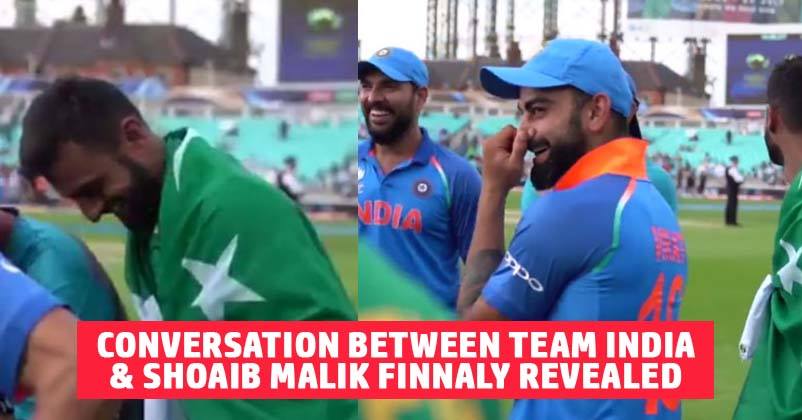 India and Pakistan have not played any bilateral cricket series for a long time now due to the tension that is going on between both the neighbors. So it is always a treat for cricket lovers of the nations when these two teams face each other in any tournament.

In the recently concluded ICC Champions Trophy, India and Pakistan played against each other two times, first in a league match in which India won comfortably and secondly in the finals which was won by the Pakistani team by 180 runs. Fans of both the countries are very passionate about the game and sometimes, they take it as a war and not a sport. However, the players of both the countries clearly understand that losing and winning are a part of the game and whichever team will perform better on that particular day will win.

At the end of the finals, it was seen that Indian players Yuvraj Singh and Virat Kohli were having a light-hearted chat with Pakistani player Shoaib Malik and Azhar Mahmood, the bowling coach of Pakistan. Many were curious to know as to what these cricketers were talking and laughing about and what Shoaib was trying to express with his gestures. And the big secret has been revealed finally! It was about a misunderstanding that took place between Shoaib and Saeed Ajmal during a match against West Indies. The West Indian batsman Chris Gayle played an aerial shot in a bid to increase the momentum of runs but he didn’t hit the ball properly and Shoaib and Ajmal ran to take the catch. As Shoaib saw Ajmal going for the catch, he stopped but shockingly, Ajmal also thought the same and left it for Shoaib. The ball touched the ground while they both kept staring at each other and an easy chance to dismiss a dangerous batsman was gone.

The political rift between both the countries doesn’t seem to settle down soon but it’s good to see players having cordial relations with each other.

Dhinchak Pooja Is Back With Her Torture! May God Give You Courage To Listen To Her New Song!
3rd Day Collections Of Tubelight Are Out! Check Out How Much It Earned On The 1st Weekend!