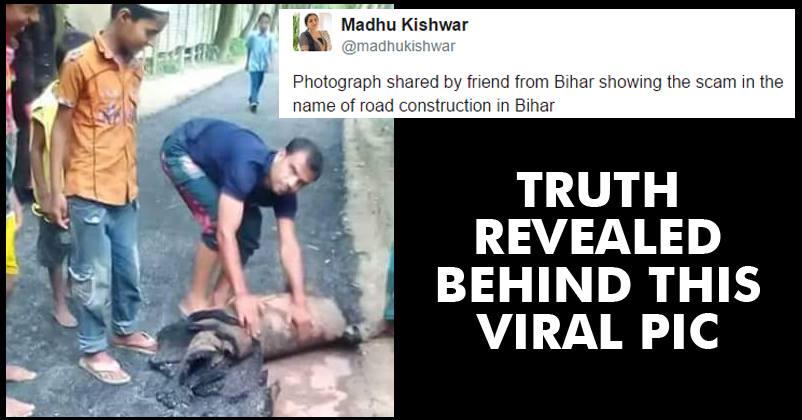 BJP is time and again criticized for its act of faking pictures for the sake of extracting benefits from political point of view and malign the image of rivals in the course of polls as well as afterward.

PM Modi is particularly scrutinized and analyzed after social media cell of BJP supposedly spread pics showcasing a large number of people at the rallies of PM Modi and all the credit for it goes to photoshop.

In fact, a Delhi court lashed out at BJP too as they presented doctored photos demonstrating progress and improvement in the city’s civic bodies ruled by the party.

And once again, a fake photo purportedly spread by the party followers is becoming the talk of social media. Madhu Kishwar who is famous for pro-BJP leaning shared a pic showing poor condition of roads with the intent of attacking Bihar govt and emphasize on its failure.

Netizens counterattacked Madhu for the fake image, shedding light on the pic which was allegedly not from Bihar but Bangladesh.

The fake pic was noticed by Tejaswi Yadav, young deputy CM of Bihar too, who in response tweeted:

An image of Bangladesh is used to malign Bihar. @madhukishwar Ji atleast expect U to share authenticate information https://t.co/tDccgnfriJ

Even journalists nowadays have started behaving like indoctrinated trolls. Height of unabashed misinformation!

Below is the original post tweeted on June 24 by Rifat Alam, a Bangladeshi user:

As you can see, the tweet is in Bengali language and in a sarcastic tone, comments on Bangladesh’s poor condition of roads, criticizing the govt.

However, Kishwar didn’t withdraw her tweet even after the whole matter has been clarified.