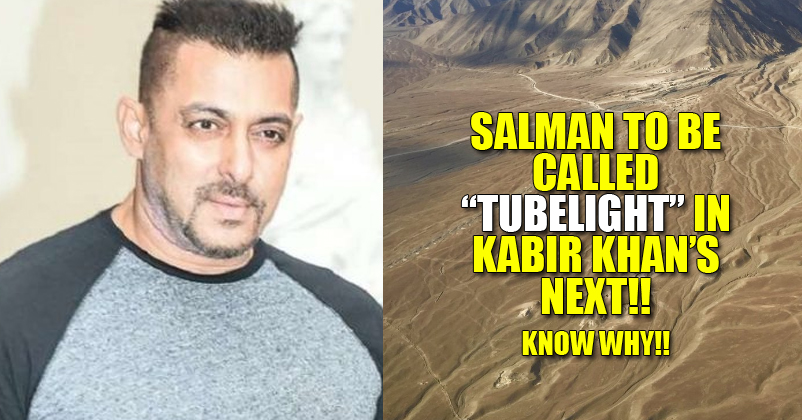 After the grand success of “Sultan”, Salman Khan will start shooting for his next movie “Tubelight” from July 28 and once again, he will be directed by Kabir Khan, the director with whom he has given mind-blowing movies like “Ek Tha Tiger” and “Bajrangi Bhaijaan”. This news was made public by none other than the director himself.

Kabir Khan took to micro-blogging site Twitter to make this announcement as well as give a glimpse of the outstanding location where the movie will be shot.

So here we are… It all begins on the 28th… #Tubelight 😊 @BeingSalmanKhan pic.twitter.com/aqS3zs5go6

The plot of “Tubelight” is set in the year 1960-62; it will be a love story of an Indian guy and a Chinese girl in the backdrop of Indo-China war.

However, what makes this movie special is not the Indo-China war but the name of Salman Khan. Yes, Sallu will be called “Tubelight” in the film as he will play the character of a man-child who finds difficulty in understanding things plus is a slow learner.

This is for the first time that Salman will be playing a “special “character, which makes it more important for Kabir to take care of sensitivity while shooting the flick.

So are you excited to watch Salman in all new avatar? Do share your views with regard to it in the comments section below.

Continue Reading
You may also like...
Related Topics:REVEALED: This Is Why Salman Khan’s Character Is Called “TUBELIGHT” In Kabir Khan’s Next Movie

This Girl Looks Exactly Like Naagin’s Mouni Roy & She Has Stormed The Internet With Her Pics!
Income Tax Department Sends Shah Rukh Khan A Notice! Know Why