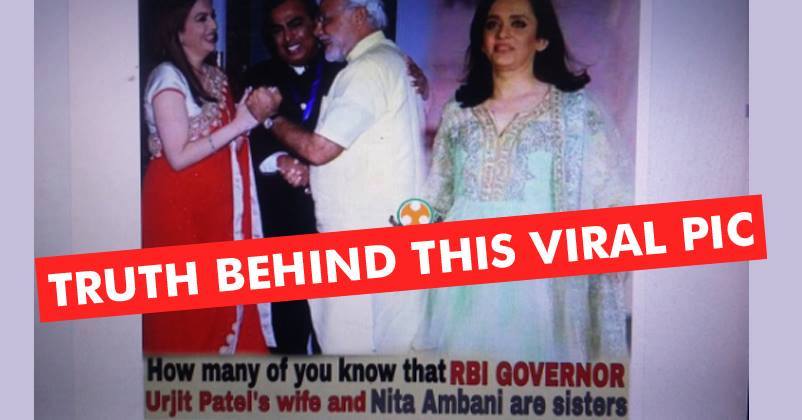 There was a time when letters and telephones were the only medium to be in touch with your friends and relatives but modern era is characterized by technology and this technology has given us one of the most important, useful yet at the same time, devastating thing, i.e., Internet. On one hand, it has united us with not only our kith and kin but the whole world; however, its wrong usage has resulted in hazardous outcome as well!! Naturally, everything has two sides and how it affects us thoroughly depends on how we use it! Agree?

One thing in which social media is quite prompt is spreading fake news without verifying its authenticity and users seem to be so impatient that they just want to pass on pics and data, regardless of whether they are genuine or false. As of now, a piece of news which is doing rounds on the virtual world and social media states that wife of Urjit Patel, the governor of RBI (Reserve Bank of India) is Nita Ambani’s sister. Now the question arises as to why it even matters but here might be some evil mind behind this who wanted to make a connection between RBI and Ambanis, implying that Ambanis might be knowing secrets of the govt. including that of the decision of demonetization to take place on 8th November. All these rumors took shape when some individuals made Twitter a filthy place by tweeting:

Fact: RBI governor Urjit Patel's wife and Nita Ambani are sisters.
Surely, Reliance would not have known abt demonetization.@tinucherian

Talking about the actual fact, Mamta Dalal is the only sister of Nita Ambani. She’s a teacher by profession and teaches at a school that Ambanis run. We have time and again requested netizens to verify first whatever they share on social media but with such viral stuff doing rounds every now and then, it seems that people just don’t want to change themselves and believe on whatever they stumble upon!

11 Skills That You Can Learn In 5 Minutes Or Less And They Will Change Your Life!
This Latest Update In Sarvjeet & Jasleen Case Will Fill You With Disgust For Indian Judiciary