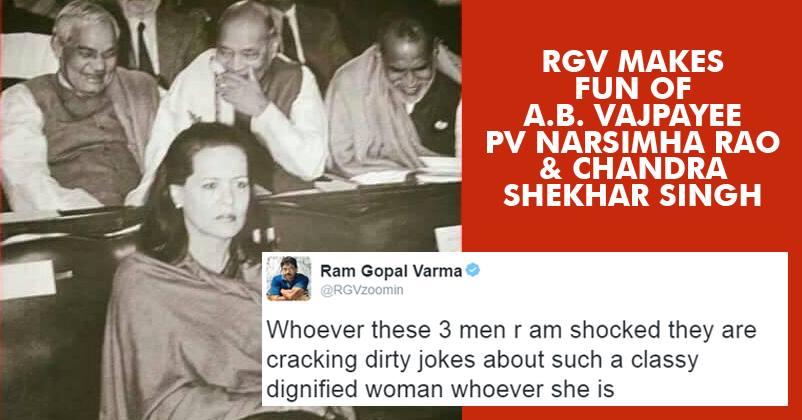 If there is a limit to utter nonsense, then Ram Gopal Varma has clearly defined it in a series of his tweets that he posted yesterday. He went ahead and literally abused our former Prime Ministers without any solid proofs just on the basis of a mistimed photograph. The photograph was about the three of them laughing behind Sonia Gandhi, who just happened to keep quite, unaware of them and their joke. Now this photograph can be interpreted into many memes and jokes but just cannot be served as proof of RGV’s accusations. Have a look at the series of his tweets.

Back benchers r always bad whether in school or parliament .Dont know who these 3 r but they look badder than each pic.twitter.com/iJ9GgqKFlM

Well, it is quite ironic to address the fact that these three ‘backbenchers’ led our nation with an example when Kargil War broke out. It was the decision of Atal Bihari Vajpayee and the courage of our soldiers who went into the war of Kargil and saved our nation from the foreign army.

This pic represents inner psyche of Indian men's disrespect for women ..Police shud investigate who they are pic.twitter.com/NRydI299M4

Now laughing behind someone ain’t a sign of disrespect towards him or her. Now when RGV talks about the inner psyche of Indian men, it makes me remind about one of his tweets. Let’s have a look at that.

Whoever these 3 men r am shocked they are cracking dirty jokes about such a classy dignified woman whoever she is pic.twitter.com/sbRJ07vpt7

Do I need to say more about him ? We do need to look down at something deeper. Three years ago, Suchitra Krishnamoorthi launched her book where she expressed her desire to Ram Gopal Varma to marry him and according to Suchitra Krishnamoorthi, this is what he said – “Suchitra I think you have misunderstood me. Completely. We are not similar at all. Never. I don’t believe in the institution of marriage. I am just not the marrying kind. I use women only for s*x and I am very sure that’s not what you want. I like women’s bodies but not their brains. In my opinion, a woman should be seen and not heard.”

When a person who uses women just for s*x and like their bodies and not their brain talks about criticizing the inner psyche of Indian men, he is way much beyond being hypocritical.

And if this wasn’t enough, Ram Gopal Varma had more for us in this Diwali. He went ahead a little step further and wished everyone an UnHappy Diwali.

Hate him or love him, but this man does know his ways to crack into news. What are your views about his tweets ? Share your opinion in the comment section below.

Akshay Kumar & Twinkle Khanna Get Emotional! Reason Will Bring Tears To Your Eyes Too
World’s Only Living Person From 1800’s Who Will Turn ‘117’! Here’s Her Secret To Long Life!