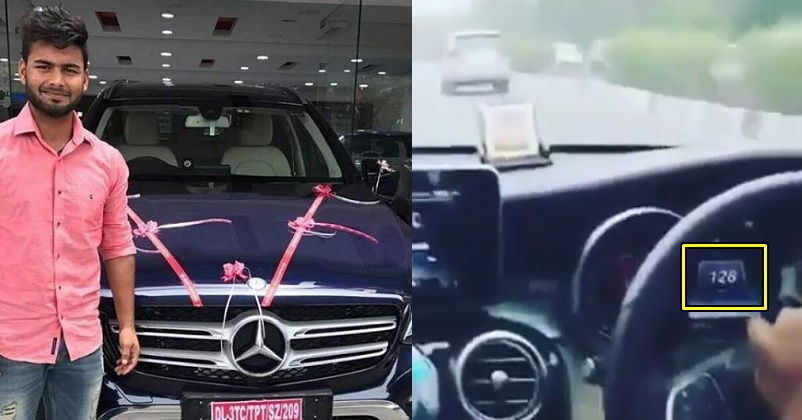 Young batsman Rishabh Pant, who have emerged as a new sensation, is at the height of his career. He is said to be the next big thing in Indian cricket. On 6 February 2016, he was bought by Delhi Daredevils for a whopping Rs 1.9 crore. On the same day, he scored a century for India U-19 in the World Cup, guiding India into the semi-finals. He is definitely having a good time and enjoying the stardom.

After rocking on the field, he decided to do the same off the field. He recently bought a purple Mercedes-Benz GLC SUV after the ending of the IPL season 10. Everyone thought that he will treasure up his precious possession and will be careful while handling it. However, things are quite opposite than thought. It seems like the DD Batsman is a bit immature on this note.

Pant decided to take a road rash with the beast and zoomed off on Delhi roads. In the short video, he is seen driving at a constant speed of 120 kmph and crossing it for few moments on the streets of New Delhi during the day time. As per Delhi rules, crossing the speed limit of 120 kmph is clearly not considerable. Rishabh posted a short video on his Instagram account which gives us a glimpse of his little road adventure, where we can have a glimpse of his car speedometer which clearly shows that it has crossed the limit of 120 kmph. Now, this video is making rounds on the internet. He never imagined that his video will be trending all over the internet for this particular reason.

Here’s screenshot from the video captured at 128 kmph (Highest speed in the video was 133 kmph):- We can understand the excitement of driving a new car but one should be careful while capturing such things on camera. The cricketer can only hope that this video doesn’t turn the wrong heads and keeps himself safe.

Twitter User Told Mitch To Stay Away From Muslims! The Cricketer Blasted At Him With Strong Tweets!
Shoaib Malik Gets Trolled For Bringing Mohammad Shami’s Religion When Asked About Best Bowler