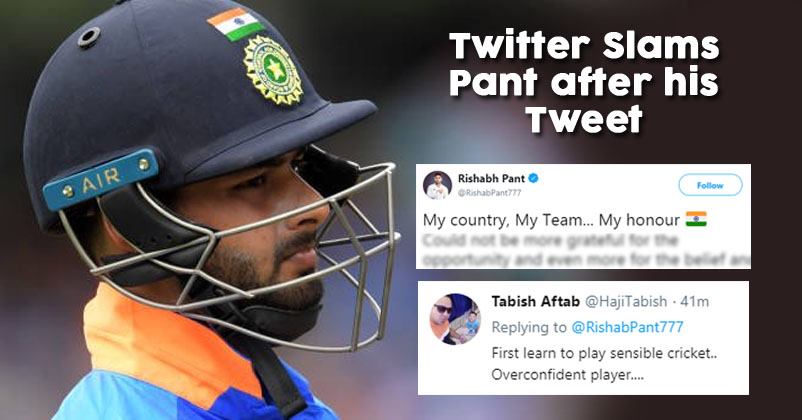 India’s loss took everyone by surprise, but a lot of people lost their hope when India lost 3 wickets before completing 6 runs. The top 3 batsmen Rohit Sharma, KL Rahul, and Virat Kholi failed to keep their stance. The match was hanging by a thread, and there was some hope when Dhoni and Jadeja hit it off in between. But again things went bad when Dhoni got out.

A lot of people were upset but kept posting how brilliantly the team has performed till now and they will always have our support. Even Rishabh Pant took to Twitter to thank people for sticking by the team and being there. He wrote in the tweet,” My country, My Team… My honour 🇮🇳
Could not be more grateful for the opportunity and even more for the belief and love the entire nation has shown us as a team 🙏🏻❤ We will be back stronger “.

My country, My Team… My honour 🇮🇳
Could not be more grateful for the opportunity and even more for the belief and love the entire nation has shown us as a team 🙏🏻❤ We will be back stronger 🙌🏻#JaiHind #Strongertogether #bleedblueforever pic.twitter.com/HZ6ac1lX53

Rishabh got trolled instead. People soon re-tweeting on how he played for the crowd and how he is a selfish player.

You need to control your self and play…u r wasting your talent…u had the chance to be a hero yesterday by winning the match for india…c how Carey is playing….u wasting it bro

Two advice for you…

Dreaming big becomes an addiction when there is a team of highly motivated members is there to achieve it.
Well played #TeamIndia in whole tournament of #CWC19 😍❤🇮🇳❤
Good Job @RishabPant777 bro 😍❤🇮🇳❤#JaiHind 🇮🇳❤#bleedblueforever pic.twitter.com/3vpJiC9mp8

Talent is nothing without some patience… A little patience yesterday and you would have been a hero….

You are a great talent, but I guess it was too soon to get you into a WC team. In the end, that might have cost us a place in the finals. Any other experienced batsman would have knocked Santner around for 3-4 an over to stay in the game, but you went for the glory shot!

People called him over-confident too.

PM Modi, Rahul Gandhi & Bollywood Celebs Showed Their Support To Team India Despite Their Loss
Ravi Shastri Comments On Dhoni Being Sent At 7th Position, Says Would Have Got Out If Played Earlier