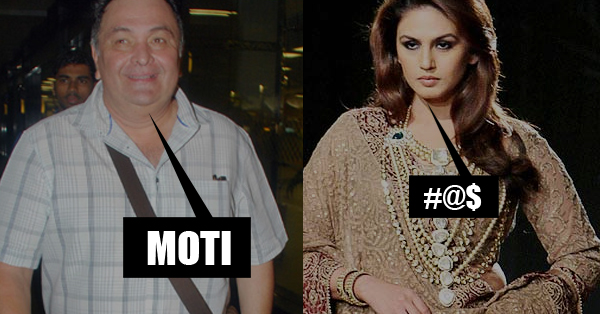 Rishi Kapoor day before yesterday had to delete his twitter post where he made a joke on Huma Qureshi’s Weight on her birthday.
It was on 28th July that Huma Qureshi received numerous birthday wishes from millions of fans & friends from the Industry on her twitter account. One of such wishes included a Birthday Wish which most of Huma’s fans didn’t like and in fact they took it quite seriously which resulted in Rishi Kapoor deleting the tweet and Apologizing to the fans for the Joke made.

Rishi Kapoor on her birthday tweeted “Happy Happy Birthday dear @humaqureshi. God Bless” with an Image which was funny and quoted on it “THE MORE YOU WEIGH, the harder you are to Kidnap.. Stay Safe.. Eat Cake!!”
The response didn’t really go well with the fans and Rishi Kapoor had to retract & apologize
He later tweeted

Apology. It was my personal joke with Huma on her birthday. If people took umbrage to it and some abuse just for the sake,I retract the same

Thank you to one of my fave costars the ever amazing @chintskap for bday wishes and love.. Guys , it was a joke … take a chill pill yaar

Huma Qureshi had worked with Rishi Kapoor in D-DAY and were good friends since then.