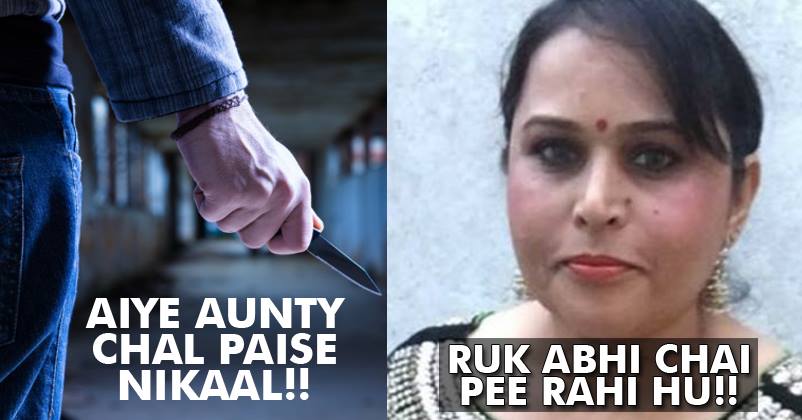 A robber tried to threaten Karamjit Sangha, a Punjabi lady from UK, who owns a News and Booze store there. He thought that being a lady she won’t be able to retaliate. But she was a ‘PUNJABI LADY’ and using her wit and smartness, she gave it back to him perfectly. He tried threatening her with a 7 inch knife and asked her to hand over all the money. She was brave enough and refused to give in to his threats. Moreover, she did something, which scared him away. Yes, the robber didn’t get a single penny; instead he trembled and ran away. Want to know what she did?

Well, she was sipping her freshly brewed tea when the robber disturbed her. Karamjit politely asked him to wait till her tea gets over. Wondering what is so special in this? Now, here’s what happened…

“I was just sitting there having my cup of tea when he came in holding this seven-inch kitchen knife. He told me to give him all the money, but I was relaxed. I told him I was having a cup of tea. He demanded I put it down and give him the money. I said ‘OK’ and picked up the craft knife and waved it at him. I wouldn’t have hurt him, but it was enough to scare him. He started shaking and then he ran off,”

She is indeed very smart, isn’t it? It is hilarious to see how a robber tried threatening her with a 7 inch knife and how she retaliated with a craft knife. Stuart will think twice before messing up with any lady.

This incident took place on the 26th of May and currently, he is sentenced to 5 years imprisonment on the charges of possession of a knife and robbery.

If there was any other lady in her place, she would have got frightened. However, Sangha preferred to stay calm and handle this situation. Talking about his jail sentence, Sangha says “This sentence is fantastic. Something like this has never happened to me before. But people shouldn’t feel sorry for me, they should feel sorry for him. He just got scared and that was it.”

We loved her wit, didn’t you? Share your views on this in our comments section below!

A Movie Style Last Stand By Sikhs That Every Indian Must Be Proud Of
Here’s What NERVOUS PAKISTAN Is Doing To Combat India! Check Out The Steps Taken…