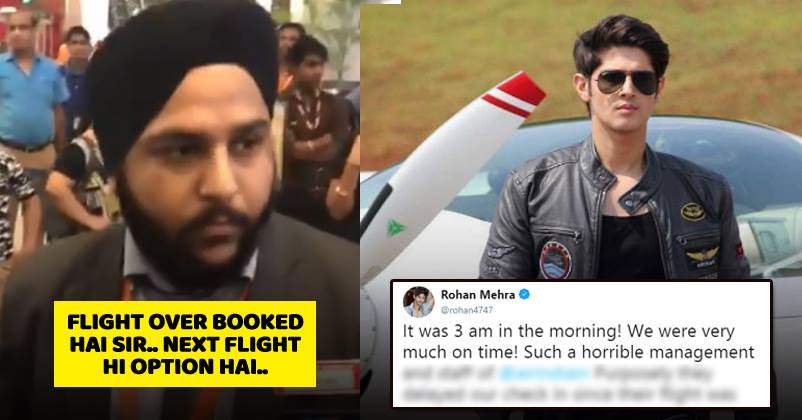 Bigg Boss contestant Rohan Mehra recently visited South Korea with his girlfriend Kanchi; their pics looked happy and it seemed that they had a great time together but their end turned out to be bitter.

Yes, when they were returning to Mumbai, they had an unpleasant experience. They had to face an unfortunate incident with Air India; Rohan couldn’t help but share this incident with all of us on Twitter.

They purposely delayed the check-in saying that the flight was overbooked. Not only that, he even slammed an airline officer because he was misbehaving with a female co-passenger.

Here’s the video of how they delayed the check-in;

It was 3 am in the morning! We were very much on time! Such a horrible management and staff of @airindiain Purposely they delayed our check in since their flight was over booked! How could they overbook when our tickets were already prebooked?@jayantsinha @DelhiAirport shameful👎 pic.twitter.com/bPahUw9xwt

When SpotBoye got in touch with Rohan, he said,

“We were coming back from South Korea and we had our flights booked from Delhi to Mumbai (3:50 am). Also, they issued our boarding passes at 2:50 am for 3:50 am flight. We were 6 people. And then they suddenly said only 3 of you can go as our flight is overbooked. We told them but our tickets were pre-booked, how can you issue tickets (over book) to others? No answer was given. Their duty manager ( Gaganjit Singh) came and started abusing one of the lady (media personality) travelling with us and snatched her phone as she was trying to record video of their abusive behaviour. We went and filed a police complaint against them. It was damn annoying as they misbehaved with a lady.”

Rohan Mehra has also filed a police complaint; there were total of 6 people who traveled from South Korea to Mumbai. Out of that, the officer said that just 3 can board the flight since it’s over-booked. He asked other 3 to take the next flight.

This is really disgusting & not expected from a carrier like Air India.

Deepika Padukone’s Comment On Ranveer Singh’s Pic Is Too Romantic To Miss
Salman Came Out To Wave At Fans On Eid. Their Reaction Will Give Goosebumps