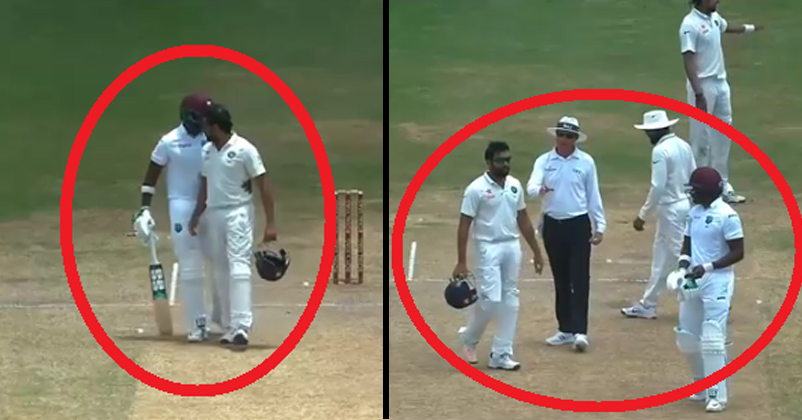 The second name of Cricket is gentlemen’s game. But the person who gave the second name hardly knew that after centuries with the increase in pressure and stress in the mind of players, this name would not be exactly representing the game of cricket in a way which it did back then. Cricket is not JUST a Gentlemen’s Game anymore. There is more that meets the eye. Things are no more simple. Aggression is something that thrives you towards excellence. It’s not the 60’s anymore.

On field rivalries are something very common. Shane Warne vs Sachin Tendulkar, Virender Sehwag vs Shoaib Akhtar and many such rivals share a mutual admiration and respect for each other. But there are some who still bites the sour tooth. Mitchell Starc vs Kieron Pollard, Shane Warne vs Marlon Samuels are some of the clashes that cricket lovers want to forget.

But another chapter has been added into this list. This time it is India’s Rohit Sharma vs West Indies Darren Bravo. Both the duo are very aggressive in their approach. And when such sportsmen meet, friction is ought to occur.

The fight broke out at the 13th over of the last day of the 3rd Test Match when Ishant Sharma got Marlon Samuels out. When the new batsman Roston Chase came on field and started having chat with his partner Darren Bravo, Rohit Sharma came close to Darren Bravo which eventually ended up in mid-pitch shoulder barge. Darren Bravo shoved him away, while Rohit Sharma did managed to brush his elbow on his belly. This was definitely not a friendly spat. Later on Umpire intervened in between and asked Virat Kohli to calm his teammate and sooth the tension between them. This cold war had been brewing since the 4th day when Darren Bravo was constantly hovering around poking Rohit Sharma while he was batting. And these back to back incidents led them indulge in some exchange of words which made Umpires conscious of the growing tension. Despite multiple warnings from the on-field umpires Nigel Llong and Rod Tucker, the feisty duo was seen constantly exchanging words in heated arguments during the course of the day’s play. At the end, when India won the match with comfortable margin of 237 runs, both of them were charged around 15% of their match fees according to the Level 1 Article 2.1.1 of the ICC Code of Conduct for Players and Player Support Personnel, which relates to “conduct that is contrary to the spirit of the game.”

At the end of Test Match, both the players admitted the offences and accepted the penalty proposed by Ranjan Madugalle of the Emirates Elite Panel of ICC Match Referees.

In such cases, there is usually no need for formal hearings.

The charges had been laid by the on-field umpires Nigel Llong and Rod Tucker, as well as third umpire Gregory Brathwaite and fourth umpire Nigel Duguid.

Watch this video where both of them are seen indulging in mid-pitch-shoulder-push.

What are your opinions about this video ?