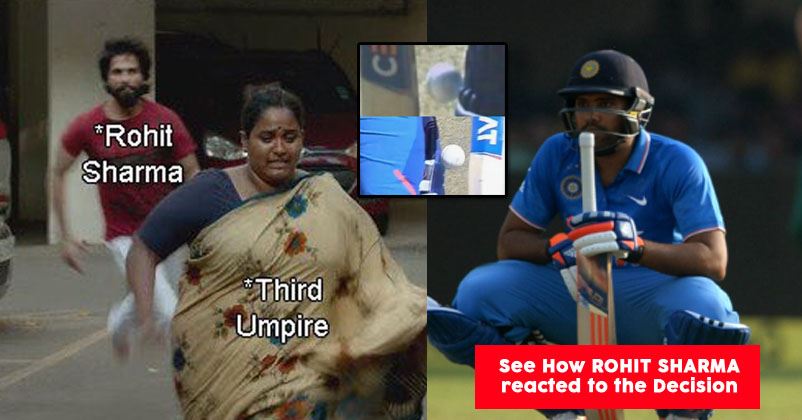 Indian cricket team’s ace opener Rohit Sharma finally broke his silence on the wrong decision taken by the third umpire against him in India vs West Indies match. Rohit was given out wrongfully. Kemar Roach’s delivery had Rohit split open.

The umpire gave not out but West Indies captain Jason Holder made an appeal to the third umpire. Third umpire Michael Gough didn’t look thoroughly at the footage and reversed the decision taken by on-field umpire Richard Illingworth.

Taking to Twitter, the player shared a still from the controversial delivery and in caption added two cute emojis. See here:

Indian fans who were already disheartened and disappointed in ICC’s third umpire came in support of Rohit. They posted some hilarious replies to Sharma’s tweet and slammed and trolled the third umpire. Some very angry fans suggested meeting the third umpire “personally”.

We all waiting for your big score in @CWC2O19 . Hope that'll come against England @ImRo45 😉😉 pic.twitter.com/nO853SrHdW

Fan Wrote An Open Letter To ICC For Sanjay Manjrekar’s Biased Commentary
These Are Top 10 Most Popular Sports Persons In India, Guess Who Is On Top