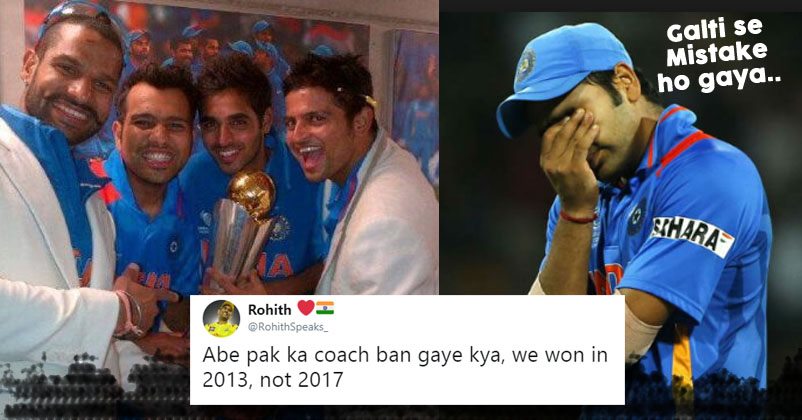 India has won ICC Champions Trophy twice till date, in 2002 and 2013. Indian cricket team shared the 2002 Champions Trophy with Sri Lanka but in 2013, the team defeated England in the finals. The 2013 win was a turning point in Rohit Sharma’s career and he was upgraded to an opener with Shikhar Dhawan. Since then they had made and broken several records in cricket and went on to become ravishing openers of all times.

Rohit has made three double centuries in ODI cricket and four centuries in T20 cricket since he became an opener. He is one of the best top order batsmen. Sharma recently shared a throwback picture from 2013. Rohit and squad, Shikhar Dhawan, Suresh Raina, and Bhuvneshwar Kumar, were seen holding the champions trophy. But Rohit made a small mistake and captioned the pic wrong.

He wrote, “These are some memories you cherish for long” and added a hashtag #ChampionsTrophy2017.
In 2017, under the captaincy of Virat Kohli, team India reached finals but lost the match to Pakistan by 180 runs. However, realizing his mistake he later deleted his tweet. 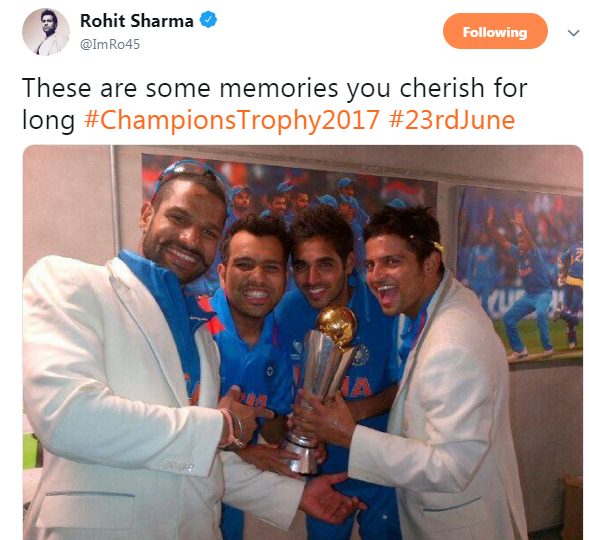 But the tweet had already caught twitterians’ attention and people started trolling him for his silly mistake. Many corrected him, some made fun of him while some criticized him for making them remember the unfortunate day and defeat against Pakistan.

Indeed memories to cherish for life brother, but ones from 2013 😂. You got me tricked too. https://t.co/7BAYbb4h6B

I dont want to look into the comment section lol😂

Hey Ro huge admirer of yours..❤️
But I think you meant #ChampionsTrophy2013