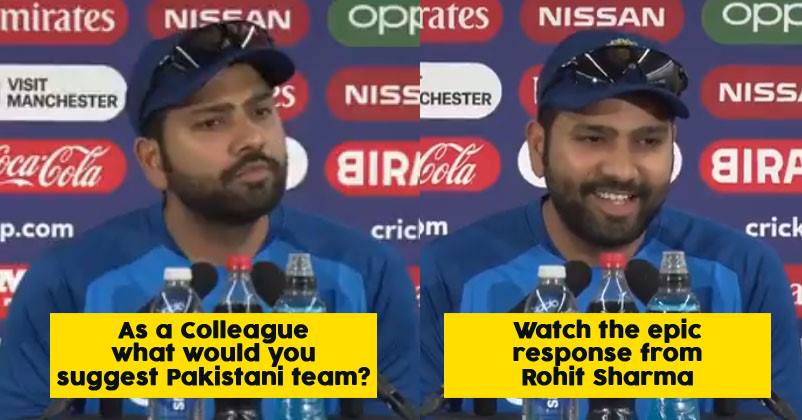 India won yesterday’s match against Pakistan and it was a victory on so many levels. The uncanny rivalry between the two countries finally went out to the field. India vs Pakistan was one of the most awaited matches in the series. And not only both the countries but the whole world was hooked on it. India won a massive victory yesterday and it will not be forgotten for a long time.

Rohit Sharma made 140 runs against our arch-rival Pakistan yesterday and he also became The fourth Indian batsman to score five consecutive 50-plus scores in ODI cricket. His last five innings read – 95, 56, 122, 57 and 140.
Yesterday after the match, he was being interviewed and one of the reporters asked him,” As a colleague what will you suggest the Pakistani batsmen on how they can come out of this crisis. ”
His reply made everyone in the room laugh. Have a look :

Q: How do you suggest Pakistan batsmen come out of the current crisis?

People were left on a laughing edge after his witty reply and some could not even believe he actually said that!

Rohit Sharma is not only a great batsman but a very savage person too!