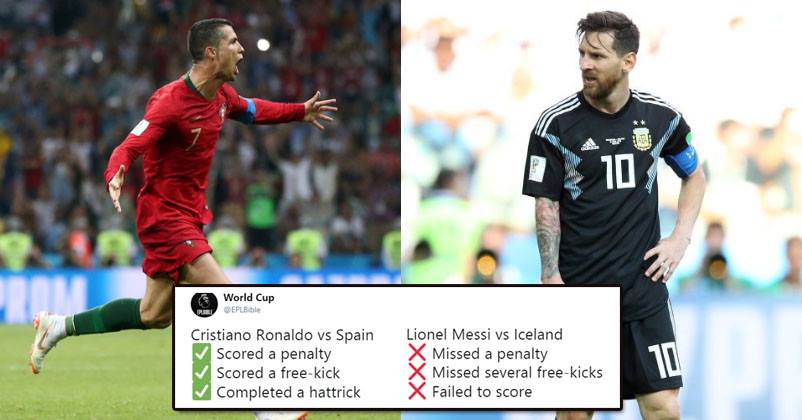 Ronaldo showed a brilliant performance against Spain. He scored a penalty, scored a free-kick and completed a hat-trick.

On the other hand, in the match against Iceland, Messi missed a penalty on the 63rd minute and also missed free-kicks. Secondly, he didn’t even score. After his poor performance, Messi is getting roasted on Twitter by Ronaldo fans.

Many feel that Ronaldo is the GOAT and not Messi. You can watch the video of Ronaldo scoring a penalty here

And here’s how Messi missed a penalty;

Click here to watch the video of Messi missing penalty on YouTube. Watch from 1:20 to see how Messi missed Penalty.

And this is how fans trolled Messi…

Messi is the type of student you will give answers in an exam and he will still fail. #WorldCup #ARGISL

Cristiano out her scoring hat tricks and messi out here missing penalties, damn

So your GOAT failed to score a penalt against a part-time film editor managed by a dentist.#WorldCup #ARGISL

The internet is a bad place 😫😫😫
See what they did to Messi pic.twitter.com/rhVN31MGbv

Two glorious chances for Messi to beat Ronaldo's wonders – A penalty and a dead minute Freekick. Both flopped.

But the less interesting thing is that, one did wonders against a World Cup champion, and another again World Cup debutantes.

Who's the GOAT now?

No need to compare and worry just because of game draw hope Messi will learn from CR7 how to score penalty and free-kick in coming games? We all have seen to kick penalty is not easy that is also a art which shown by @Cristiano Ronaldo perfectly in yesterday game.

Messi choked another penalty shot. My GOAT would never @Cristiano

This debate is surely going to get stronger day by day. It’s worth watching who justifies the title of GOAT this time.