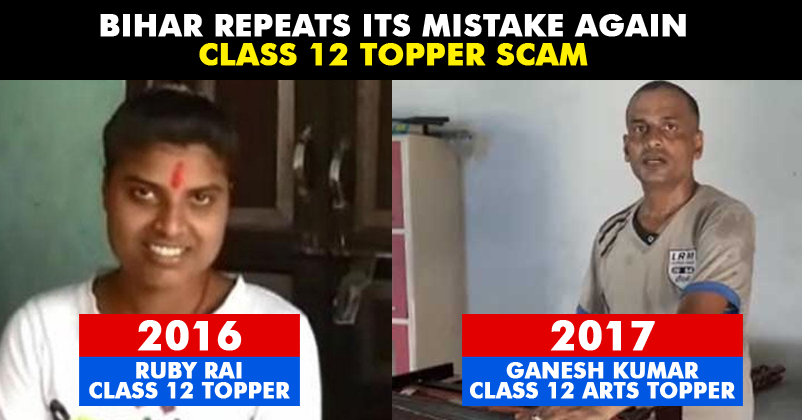 Remember Ruby Rai? The prodigal science student, who topped in Bihar Board examination? Yes, the same girl who feels political science is about cooking. Well, we have another shocking news from Bihar again. Humanities topper Ganesh Kumar is a student of Ramnandan Singh Jagdip Narayan High school in Samastipur’s Chhakhabib village. He scored 82.6 percent; in spite of being a music student, he couldn’t answer even basic questions. 24-year-old Ganesh Kumar scored 92 percent in Hindi, 82 percent in music and 42 percent in social science. Fingers are being raised regarding his practical marks in music. He scored 18 out of 30 in theory and 65 out of 70 in practical. When reporters asked him some basic questions about music, he failed to answer them. He couldn’t differentiate antra from mukhra and sang some Bollywood songs, when asked to sing. Different news channels have interviewed him and asked him various questions about music. One of them asked him to if he can play any instrument. He tried to play dholak in front of the reporter but failed miserably. When the reporter asked again, he confessed that he doesn’t know how to play dholak or any other instruments.

Ganesh, however, seemed fine with other subjects, although questions are being raised on the school authority. On what basis have they evaluated the marks? Reports stated that his school has cancelled his felicitation program after the rise of this controversy.

We have collected some of the questions asked by reporters along with their answers after watching several interviews. It’s listed below.

Ganesh is originally from Giridih in Jharkhand. He said that he moved to Samastipur in search of work and joined school after some local people suggested him to.

Regarding this matter, education minister Ashok Choudhary, after a meeting with Chief Minister Nitish Kumar said,

“The board chairman has himself said the evaluation process was carried out in a proper manner…the media is always looking to rake up something negative.”

He further questioned if the media person who asked the questions was himself a musician.

Although Ganesh was not able to answer some basic questions about music, he shouldn’t be held liable for this as it is up to the school authority to evaluate the practical marks. However, question remains that if he had not received this courtesy from school, would he be able to top the exam? Do let us know what your thoughts are on this.

IIT-Delhi PhD Student Commits Suicide After Dowry Demands From In-Laws!
Bhutta Seller Scores 87% In Class 10 Exams Despite Financial Burden! We Are Proud Of You!