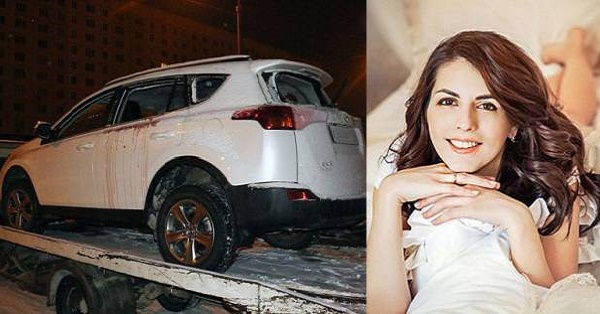 As per the report from The Siberian Times, a beautiful and glamorous lawmaker who represented the third most populated city of Russia has died in a bomb blast with her husband, who was an Ex-Army man.

The media reports says that the Russian parliamentarian Oksana Bobrovsky (30) who represented Novosibirsk city was killed in a bomb blast when she was indulged in sexual activity with her husband Nikita Bobrovsky (28).

The incident has taken place in the city of Novosibirsk in Siberia and police is suspecting that the bomb may have been detonated by the husband, out of haste or jealously.

The report also alleges that the couple had a fight before the incident as husband believed that Oksana is cheating on him. When the bomb detonated, its noise was enough to alert everyone around the car.

An eyewitness of the incident told, “First there was an explosion. The security alarms on neighboring cars started to scream, and I joked to my husband that the war with Turkey must have began. And then I looked out of the window and saw this all carnage. My husband went down to the street, and I looked through the window. It was horrific something you would not wish anyone to see. No heads, glass covered in blood… a nightmare.”

The couple had a 4 year old daughter, who is now with her grandmother.