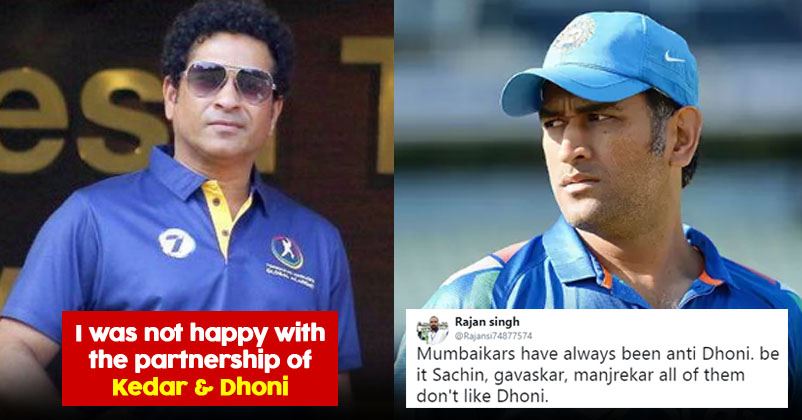 Afghanistan gave a tough fight to India in the last match. Our men in blue are making their way to the World Cup 2019 with almost a perfect win score now. India has won all the matches till now and we are eagerly waiting for them to fight the West Indies.

Afghanistan came out as star when they put the Indian cricket team in a fix. Brilliant batsmen like K L Rahul, Rohit Sharma, MS Dhoni could not stand against the wrath of Afghanistan’s bowlers. Thankfully Bumrah’s bowling and Shami’s hattrick saved our day. We were all happy with how the team played, but I guess Sachin Tendulkar was not. Sachin Tendulkar recently criticized Dhoni for not taking responsibility and playing well when the Inidan team was falling behind.

“I felt slightly disappointed, it could have been much better. I was also not happy with the partnership between Kedar and Dhoni, it was very slow. We batted 34 overs of spin bowling and scored 119 runs. This was one area where we didn’t look comfortable at all. There was no positive intent.”

“A senior player Dhoni should have taken charge as Jadhav’s batting was hardly tested in the tournament. “Kedar Jadhav was under pressure, he had not had an outing up until now. He needed someone to take charge of the situation early on but that did not happen. Both Kedar and Dhoni were not able to play at the required strike rate that they would have wanted.”

Of course, this did not go well with a lot of Dhoni’s fans. A lot of people called him an over-rated batsman and selfish.

One said disappointed and upset for missing his miletone.

With all due respect, @sachin_rt Sir, everybody seen that pitch was reacting very slowly and ball was not coming to the bat properly. I am not saying that dhoni played very well but i must say again that nobody can teach what is @msdhoni's job and how to do it. #CWC19 #INDvAFG

Mumbaikars have always been anti Dhoni. be it Sachin, gavaskar, manjrekar all of them don't like Dhoni. may be the epicenter of cricket has been shifted from Mumbai to rest of India that hurts these guys. Dhoni is a legend & he will bounce back.

It is scary how people do not think twice to call out to people. Placing your opinion is fine, but insulting someone is not.

King Of Romance Completes 27 Years In Bollywood, Fans Are Overwhelmed With Love
This Photo Of Sarfaraz Ahmed Bending Over Lord’s Balcony Is Now Serving As A Meme