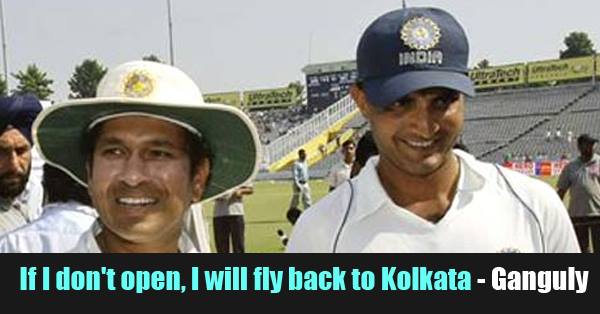 Sachin Tendulkar and Sourav Ganguly made a perfect opening pair; one is known as master blaster while the other one is the God of Offside. They both have opened the innings for India many times, broken records, won matches and given sleepless nights to many bowlers, and not only that they also share a strong personal bond of friendship.

So, it was quite shocking and surprising when Sourav Ganguly said something to his old friend Sachin, which was nothing short of a threatening statement.

Sourav’s statement was concerned with the All Star T20 league which is started by Sachin Tendulkar and Shane Warne and it is going to be played in USA.

This is what Sourav said, “I have told Sachin, if I don’t open, I will catch the next flight to Kolkata. So that is a criterion for playing.”

Sourav is part of Sachin’s team and he wants to open the batting, but why is there any doubt in his mind that he won’t be allowed to open. The reason of his doubt is the presence of former Australian cricketer Mathew Hayden, who has also played as an opener for his team and has been one of the most destructive openers of his time.

However, Sachin’s response to Sourav was pure classic, this is what he tweeted:

Dada your application for the opener's position is being processed!Hope the off drive is coming from the sweet spot @T20AllStars @ShaneWarne

Well, whoever opens, watching Sachin, Sourav and Mathew is going to be a treat for the audience.

Yuvraj Singh Trolled Media For Spreading His Wedding Rumors. Check Out His Reaction
Check Out Why Rahul Dravid Isn’t A Part Of Cricket All Stars Tournament..!!