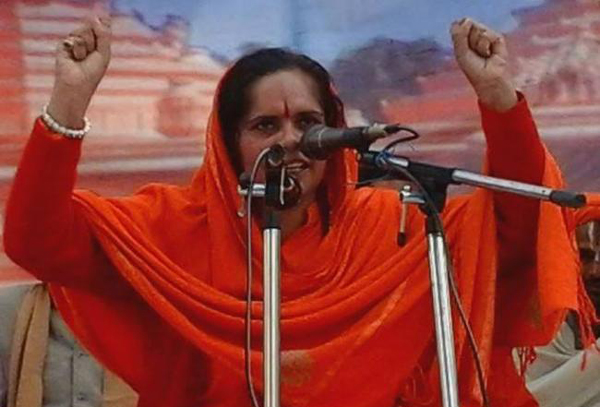 Even after Prime Minister Modi’s stern warning to politicians not to cross “laxman rekha” while expressing their views publically, the controversy admirer BJP leader and preacher Sadhvi Prachi yet embraced another controversial issue addressing the Father of the Nation a British Agent. Markandey Katju too, the Former Supreme Court judge called Gandhi Ji a British agent recently in his blog, for which he has been send legal notice by the Gandhi Youth Foundation.
The VHP leader in saffron said that India attained freedom not because of the damn ‘spinning charkha’ but because of sacrifices made by brave sons of Mother India like Veer Savarkar and Bhagat Singh, who gave up their lives to make India’s coming generation breathe in the atmosphere of freedom. She further went saying that those who don’t utter the word “bharat mata ki jai” or “vande mataram” is disrespecting the national flag and those who are involved in cow slaughter doesn’t have any right to stay in this country.
It’s not the first time she is hitting the headlines by the inflammatory remarks, but she has always been seen in the limelight due the controversy she creates. Earlier she warned and restricted youth to not to idolize the Bollywood stars and called a boycott of movies of the Bollywood Khans.
She attracted huge criticism by saying that if persons of other community produce 40-50 children, then Hindus should also raise at least four children. The BJP leader supported BJP MP Sakshi Maharaj’s comment wherein the Hindu women are advised to produce four children to enhance their own community.
Well, what she said is indeed controvertial issues; but not all she said is baseless. There is a big question mark on the loyalty and ethics of Mahatma Gandhi. But Hindu women are not bound to produce 4 children; it depends on every woman’s wish, what she wants. And i think, boycotting khan’s movies are just baseless. Do you say, the movies like ‘PK’ and ‘My Name Is Khan is harmful’ for society?