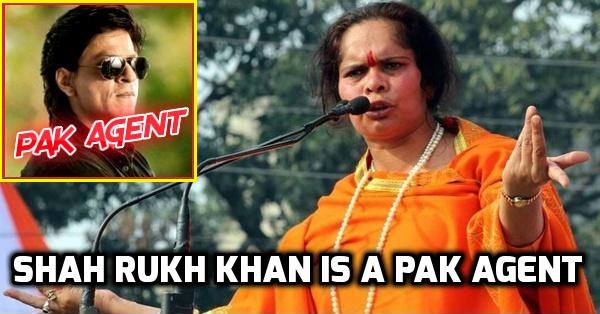 As per the reports, Sadhvi Prachi, Vishwa Hindu Parishad leader has called the King Khan of Bollywood, Shah Rukh Khan a “Pakistani agent” on Monday, after Shah Rukh made a comment that there is “Extreme Intolerance” in the country.

She criticized Shah Rukh for saying that the growing intolerance in the country would hamper its prospect of becoming a Superpower.

Shah Rukh Khan turned 50 on Monday and he was speaking to TV Journalist Rajdeep Sardesai when he said this, “There is intolerance, there is extreme intolerance… there is I think… there is growing intolerance.”

He further added, “It is stupid… It is stupid to be intolerant and this is our biggest issue not just an issue…Religious intolerance and not being secular in this country is the worst kind of crime that you can do as a patriot.”

When he was asked whether he will also return his Padma Shri award, he said, “I mean just for a symbolic gesture, yes, if I have to.”

Sadhvi Prachi said that Shah Rukh Khan should be charged with treason and he should be sent to Pakistan, she advised the youngsters that they should not follow these stars and boycott them as their movies encourage violence.

In March also, this year Sadhvi Prachi had asked the workers of the Hindu organizations to tear the posters of the movies of all three Khans – Shah Rukh, Salman, Aamir and use them for bonfire.

Do you think SRK made a mistake by expressing his opinion and invited criticism for himself? Share your views with regard to the article in the comments section below.