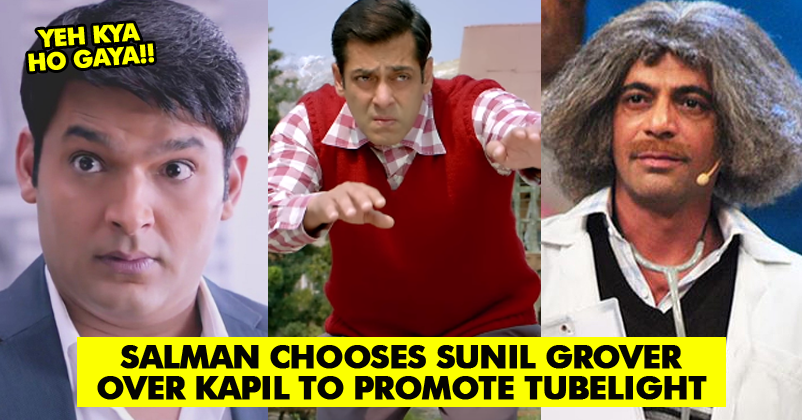 Kapil Sharma and Sunil Grover has been the centre of attention after their fight on a flight. After this incident, many left the show along with Sunil. Things are going bitter and there are no signs of betterment in recent times. Comedy King Kapil’s show has faced difficulties as the fans of Sunil have decided to not watch his show. Reports claim that the TRP of the show has reduced significantly.

Seems like Kapil’s days are not going so well as he received another blow after Salman Khan decided to go with other stars i.e. Sunil Grover, Sugandha Mishra and Ali Asgar for his movie promotion. Yes, he has chosen to do a show with these 3 stars for promoting his movie, rather than Kapil Sharma’s show. The duration of this show would be 2 hours and will be aired on Sony channel itself! Poor Kapil, what will happen to his TRPs? Salman’s presence on The Kapil Sharma show could have helped Kapil to revive his show as Salman has a huge loyal fan base. Now that Salman has taken the sides of Kapil’s rivals, it might give him another break.

The shooting of the show is complete. Sources say,

“We recently shot for a promo and it will soon go on air. Sunil Grover was not part of the promo shoot as he was traveling for his one of his live events. It will be a two-hour special episode and will mostly have all the actors who recently quit ‘The Kapil Sharma Show’ after Kapil’s spat with Sunil on a flight. Salman is very close to Ali Asgar and when he got to know that they are not doing anything for the past three months after their now infamous fight, he opted to do a special episode with them. Now, since Salman will shoot the two-hour special episode with Ali Asgar, Sunil Grover and team the chances of him appearing on The Kapil Sharma Show is very bleak. The episode will have Salman Khan and the cast of ‘Tubelight’.”

This is definitely a bad news for Kapilians. We are not sure if he will be coming to the Kapil Sharma Show or not, but looking at the circumstances, the chances are thick. This might be a starter for Sunil Grover and get him new scopes. On the other hand, Kapil is struggling to get the TRP back. What do you think? Who will excel in the battle of comedians? Do let us know.

These Bollywood Actresses Who Played Mothers’ Roles Were Of The Same Age As Heroes!
Fake Director Tried To Play Prank On Rajkummar Rao! What He Did Next Was Unexpected!