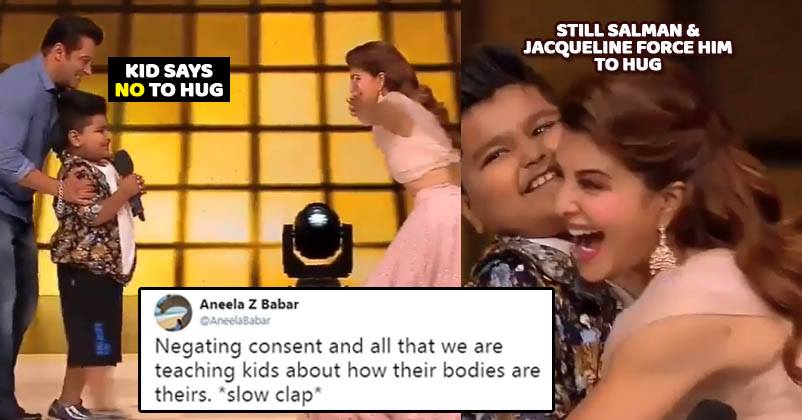 Remember why popular singer Papon had to face the door of the reality show? The singer kissed a minor girl at the backstage of the show and the video of the same leaked online that sparked controversy.

However, he defended himself by saying it was a paternal affection without any malicious intent but the damage was irreparable and everyone trolled the singer. And, it seems similar kind of episode repeated with Salman Khan.

Race 3 stars are promoting their upcoming thriller action with full zeal. Salman Khan and Jacqueline Fernandez after promoting their film on before finale party of IPL reached a reality show ‘Dance Deewane’ which is judged by Bollywood actress Madhuri Dixit.

Recently, Jacqueline shared a video featuring her and Salman with the message: “Kids usually love me, this boy was an exception.. at least I got my hug in the end”. In the video, we can see Salman asking a child participant to hug Jacqueline, but he denied by saying no.

Later, the actor tried to make the child forcibly hug Jacqueline twice. Everyone present on the show found it cute and harmless but not people on social media.

Kids usually love me, this boy was an exception.. at least I got my hug in the end 😜😝 #dancedeewane @beingsalmankhan @madhuridixitnene @anilskapoor

This act of Salman invites criticism for him again and twitteratis put forward their views to teach him on this episode that he has no rights to force any child to hug someone even though she is an actress.

Check out the tweets and see how Twitterati school Dabbang Khan for forcing a child to hug:

@BeingSalmanKhan @Asli_Jacqueline If a kid repeatedly says he doesn't want to hug you, shouldn't you probably respect his wishes and consent and mind your own business and understand simple "NO" https://t.co/AyBLikaCnM #WeToo #Metoomovement

Kid of 5 or 6 says he doesn’t want to hug Jacqueline Fernandez. Celeb panel laughs. “Aise kaise?” Repeatedly he says he doesn’t feel like hugging her. Body language suggests same. Salman Khan forces him to hug her. Forces him to “tightly hug her” once again. Consent be damned. https://t.co/UPd9RfI0mD

https://t.co/9aOCgC3reB how is this okay? @Asli_Jacqueline asks for a hug. The child responds with a firm and unequivocal no. So @BeingSalmanKhan steps in and forces him? @MinistryWCD

So @Asli_Jacqueline put up this video today https://t.co/yhWcsP3tBN
Salman Khan practically coerces a little boy on a reality show (who says he does not want to hug her) into giving her a hug. Infuriating!

As was already disappointed by u, u have added 1more point for not liking u@AneelaBabar #RespectConsent #SaveChildren

Lol the expressions & body language of kids doesn't suggest of the harrassment at all.. in fact he was looking extremely comfortable & playful during the whole situation. Koi or bakra nahi mila kya aaj 😅

Why should anyone's forced to hug?? Very wrong.

What’s your opinion? Do you feel Salman was wrong here?

Remember Sameera Reddy From Race? She Doesn’t Look Like This Anymore
After Hina Khan, Shama Sikander Posted A Pic In Bikini During Ramzan, Got Heavily Shamed