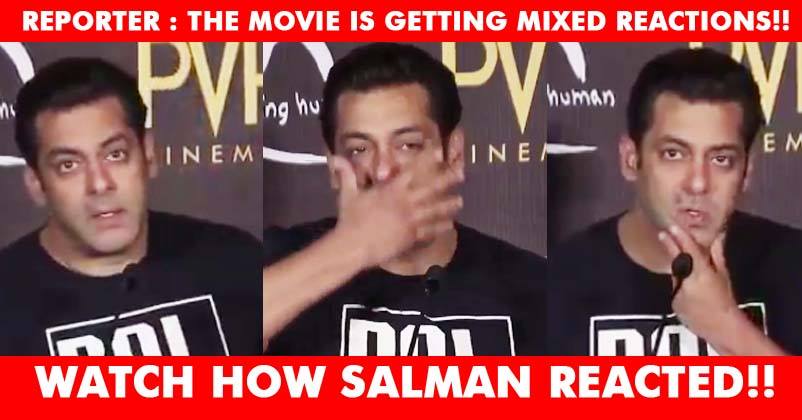 Salman Khan starrer “Tubelight” released yesterday with a grand fanfare; however, the movie is getting mixed reviews and people are a little disappointed too, considering the fact that this film is directed by the director of “Bajrangi Bhaijaan.” The reviews by the critics are also not good but we all know that neither Salman nor his fans care about the critics.

Salman was interacting with media during an event on Friday and he was asked about the mixed reviews that “Tubelight” got. The reporter also expressed doubt that the flick would not be able to create magic like “Bajrangi Bhaijaan”.

Answering these questions, Salman says that he is happy with the critics’ rating as they have given 1.5 while he expected -3 or -4. He adds that it is an Eid release and it is not for those who watch a movie to throw chillar and dance. It is a very emotional film and even an emotionless person will have tears in his/her eyes while watching it. He further said,

“They were expecting a different film, that’s why I said they were expecting a different kind of film. If you… I’ve got so many text messages and so many people have told me that you know when we saw you brothers dancing you know we had tears on the song. So I said isme rone ki kya baat hai bhai, 2 bhai naach rahe hain, happy gaana hai wo.. nach meri jaan. Then they said ki you know, that shot when your brother Sohail is going and you hug him and cry in that tinka tinka song, you know we got emotional. So we had prepared the audience for a beautiful, simple, emotional film about bhais, about brothers you know! That is what we prepared them for!” As far as mixed reviews are concerned, the actor is of the opinion that every movie gets mixed reviews. On the question of any sense of failure, Salman stretches his arms, points toward his face and says,

“What? Does it like look bother? Haan? I am not bothered. I’m sure it’s going to do OK. It’s gonna get us a lot of respect.”

If you have watched “Tubelight”, do let us know how you found it in the comments section below.

Fight Between Rannvijay & Prince Gets Intense! Prince Walks Out Of The Show!
First Day Collections Of Tubelight Are Out! Very Disappointing Numbers For A Salman Film!