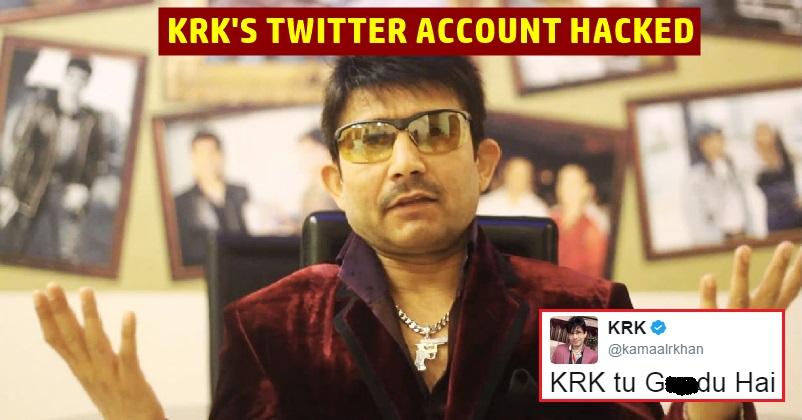 Attention seeker KRK leaves no stones unturned to insult celebrities with his trolls; unfortunately, he gets badly thrashed in return. In spite of being slammed a number of times, KRK hasn’t changed his attitude. But now, something unfortunate has happened with the poor guy, haha!

It seems KRK’s tweets have crossed all the limits and have angered some Salman Khan fans, due to which they decided to hack is account. Yes, the Twitter handle of this self-proclaimed critic has been HACKED, but this has given users a good opportunity to troll him and have fun.

The one who hacked his Twitter handle posted abuses on his wall and also asked others to re-tweet his tweet so that KRK’s account is permanently deleted. The Deshdrohi actor already got a hint that his account is hacked and so, he notified everyone with a tweet which said that he’s trying to recover it.

Soon after this, the hackers posted a series of tweets. They hurled the worst of abuses at KRK and said the dirtiest of things about him.
Check out what all was tweeted…

In a few minutes, KRK managed to recover his account and the first thing he did is cursed Salman fans. He said that they have committed the biggest mistake of their life by hacking the account. Here’s the tweet…

People trolled him and many called this as a publicity stunt. Don’t miss these tweets…

Publity stunt at its peak,,

What do you have to say about this? Was his account really hacked? If yes, Salman Khan and Salman Khan fans will be finished; galat aadmi se panga le liya, LOL.

Finally Gautam Gambhir Reacts On Not Being Selected In The Team! His Response Proves His Class!
This Bindaas Bride’s Dance On Cheap Thrills Is Driving The Internet Crazy! You Can’t Miss her Thumkas!