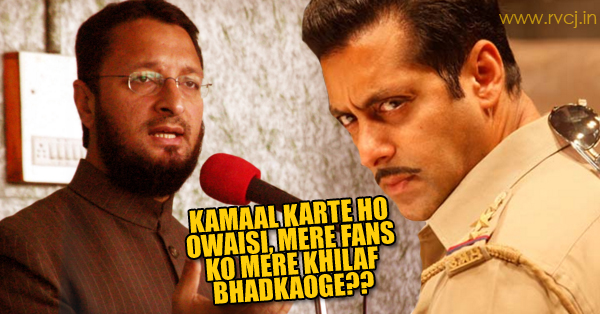 We all are well familiar with the friendship of Bollywood superstar Salman Khan and the Prime Minister of India Narendra Modi. They have been seen together many times; for instance, Salman flew kite with Modi during Makar Sankranti in the year 2014 as well as was present in Modi’s swearing-in ceremony with his father.

Even fans of Sallu Miya are also happy for his closeness with the PM; however, there is one person who doesn’t seem to like this friendship and he is none other than Asaduddin Owaisi, the President of All India Majlis-e-Ittehadul Muslimeen, who openly talks against it.

Few months ago, Hyderabad MP made an appeal to his supporters during a public rally not to watch the movies of Salman Khan. Owaisi also made headlines for this statement; nevertheless, when Salman Khan was asked about it, he gave Owaisi a kickass reply that you just can’t miss to watch:

How you found this reply of Salman? Share your views in the comments section below.