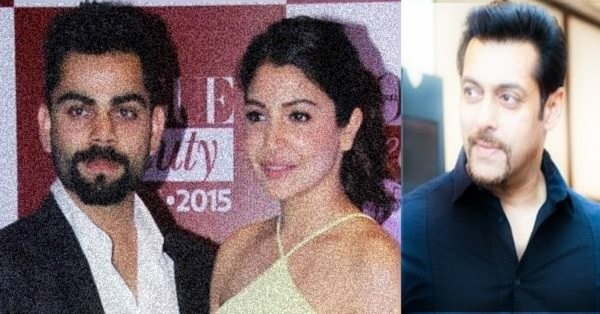 Before your creative mind starts thinking much, let us make it clear that Salman’s name has been brought in this break-up because Anushka is signed as the lead actress in Sallu’s upcoming movie “Sultan” and this gave rise to a dispute between Virat and Anushka.

It is being reported that Virat decided not to play in India-Sri Lanka Twenty-20 series as he was in mood to spend some time with his girlfriend on Valentine’s Day but the talented actress signed “Sultan” and took some other assignments without informing Virat about her decision. The cricketer got upset with it and he tried to persuade Anushka but it was of no use as she was not ready for postponing or leaving her work assignments.

As per media reports, Anushka has also refused Virat’s marriage proposal as she wanted to give her career more priority than her personal life presently. Well, it seems Virat should also focus on upcoming cricket series rather than making plans for Valentine’s Day.

After SRK’s Disappointing Dilwale, Varun All Set For Doing Sequel Of This Popular Sallu Movie!
All You Need To Know About World’s First Model To Have Different Colored Eyes, Sarah Rose Mcdaniel