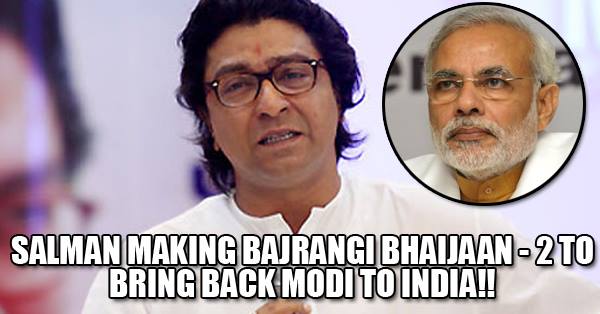 While answering the questions asked to him in the India Today Conclave, Raj Thackeray didn’t leave the chance of making a jibe on PM Narendra Modi regarding his foreign trips. President of Maharashtra Navnirman Sena (MNS), Raj called PM Modi as the first PM in the Indian History to be out of the country for so long.

While taking part in the India Today Conclave in Mumbai, on Thursday, Raj said, “What kind of a government do we have? Instead of doing work, they are behind banning every possible thing. Here we have a PM, who is the first in the country to have remained out of India for so many days.”

Raj further spoke in a sarcastic manner, “I just heard that Salman Khan is now making ‘Bajrangi Bhaijan’ part 2. In the sequel, he will be seen bringing back Modi to India from a foreign country.”

You can watch the video here:-

Till October 2015, total 28 foreign visits have been made by PM Modi, majority of them were to Asian countries as a part of Neighborhood and Act East Policies.

He also criticized the proposal of Bullet train on the Mumbai-Ahmedabad route, he asked what purpose would this Bullet train will solve, he said, “Why do we need a Bullet train between Mumbai and Ahmedabad? Why not to some other state? What purpose will it serve? Just go to Gujarat, eat a Dhokla (Gujarati delicacy) and come back. That’s all.”

He also talked about the rift between BJP and Shiv Sena, who are partners in the government as he said, “The way these both parties fight publicly, even husbands and wives don’t fight this way. CM says all is well between them, but if that is so, one needs to go and ask the Sena ministers.”

He further added, “It is only the BJP whose ‘Acche Din’ have come. Their ally and its ministers are only sulking.”

He supported Shiv Sena’s protest against Pakistani Ghazal Singer Ghulam Ali’s concert in Mumbai as he spoke, “Opposition is not to him as a singer. But, do our artists get the kind of respect they deserve in Pakistan? There is so much of talent here in India that we do not need an outsider to perform here.”

Mangalore Couple Found Worms In Their Zinger Burger After They Ate Half Of It
Man Survives Even After 2 Iron Rods Pierced Through His Neck. Truly Miraculous