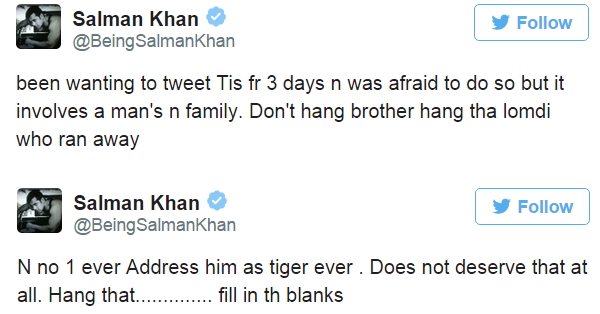 “I submitted a letter to the Governor asking cancellation of bail of convicted Salman Khan for supporting a convict in his tweets” said Shelar.

“Very disappointing to see that Salman Khan who has many followers is asking for release of Yakub Memon. His (Salman’s) bail should be cancelled on the basis of the support for crime,” he said in a tweet. Dabangg star of Bollywood, Salman Khan seemed to have supported Yakub Memon and for the same, he came forward and chose Twitter for expressing his views and opposing death penalty of Yakub, the convict in 1993 Mumbai serial blasts case.

Twitter is hot with scorching tweets in this connection wherein Salman punted at Tiger Memon, brother of Yakub who disappeared and was among major suspects of this case.

According to the Bajrangi Bhaijaan star, this would not at all be fair if Yakub hanged whereas Tiger was a prime suspect. Let’s take a look at the tweets in this series:

Whatever the reason may be, Salman later deleted his controversial tweets and tweeted the following:

I have not said or implied that Yakub Memon is innocent. I have complete faith in the judicial system of our country.

Many lives were lost in the Mumbai blasts. And I have repeatedly said the loss of one innocent life is equal to the loss of all humanity.

My dad called & said I should retract my tweets as they have the potential to create misunderstanding. I here by retract them.

I would like to unconditionally apologise for any misunderstanding I may have created unintentionally.

I also strongly condemn those who are claiming my tweets are anti religious. I have always said I respect all faiths and I always will.

Yakub Memon has to be hanged on July 30 in the morning, at 7am in Central Jail, Nagpur, as per the order given by special court on April 29, 2015. Yakub went to the Supreme Court on July 21, 2015, where he made a curative appeal which was rejected and after that on July 22, Yakub gave a new mercy petition in the office of the governor.