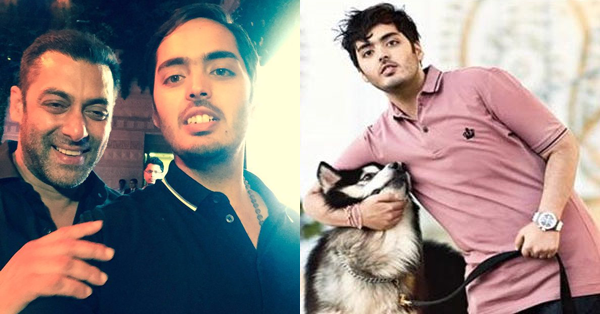 Anant Ambani, the youngest son of Industrialist Mukesh Ambani, has surprised everyone by losing 108 kgs in just 18 months. Everyone is praising the young Ambani for his sheer dedication and determination and one of them is the Dabangg star of Bollywood Salman Khan.

Salman posted a selfie with 21 years old Anant and tweeted:

So happy to see Anant Ambani,lots of respect n sooo happy fr him.Takes a lot of willpower to loose 108kgs in 18mnths pic.twitter.com/Rfd6pgAeEn

Salman not only has been a fitness freak all his life but also has encouraged and helped many other Bollywood celebs to get in shape, such as Daisy Shah, Zarine Khan, Arjun Kapoor and others.

Controlling the temptation of eating your favorite food is very difficult and Anant kept himself far from sugar and high protein food for the whole time and lost 6 kilos every months. It is said that he gained weight due to the medication that he took for his disease of chronic asthma.

Let’s take a look at Before and After pic of Anant Ambani: Twitter also reacted to Anant’s achievement and Salman’s appreciation in a satirical and hilarious way!!!!

This is how people are using old T-shirts of Anant Ambani:

After Anant Ambani lost weight, people are finding new ways to use his old T-shirts. pic.twitter.com/M2uv4m9oEL

From Road Roller To Roll Model:

Now there will be a biopic on Anant Ambani.
A man's journey- From Road Roller to Roll Model.

Is it a coincidence that at the same time Anant Ambani lost 108 kilos, #MH370 was found? #AnantAmbani

Almost every Bollywood star and Cricket star is praising Anant Ambani..Money really get you lot of admirers #satyavachan

You can’t win an argument with girls 😛

She: Anant Ambani lost 108 kg. Respect.😱
He: Khud kitni moti hogayi hai wo dekh.😝
She: Women come in all sizes. Everyone is beautiful.😊

Anant Ambani – The New Inspiration Of All Fat People

Anant Ambani lost 108 kilos because he had 108 kilos in his body. A poor family of 3 doesn't have this much weight combined sometimes.

Only PM Modi is left 😛

Finally, the WEIGHT is over:

@firstpost "A US based trainer helps Anant Ambani lose 70kgs". Finally, the weight is over !