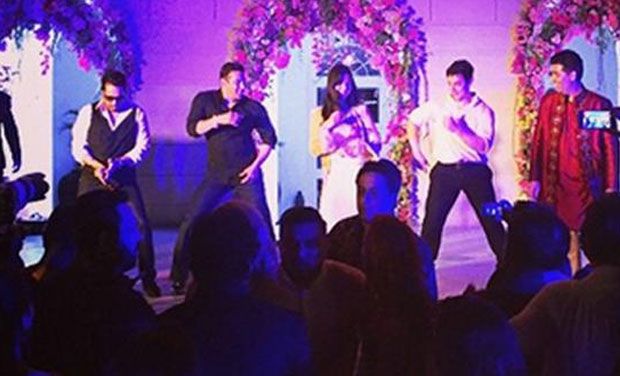 As expected, Katrina Kaif was there to attend the marriage ceremony of her ex- boyfriend Salman Khan’s sister – Arpita Khan.
But you will be surprised to watch what happened next.

According to a report in The Times Of India, just before the small ‘Chikni Chameli’ performance, Salman grabbed the microphone and called her ex-girlfriend Katrina Kaif on stage, he announced —

But, Katrina felt embarresed and chose to hide behind Karan Johar and pretended to ignore Salman.
Once again Salman announced —

Finally, when Katrina was left with no choice, she finally walked up to stage and Salman pulled her leg by saying, “Mai kya karoon…I gave you a chance to become Katrina Khan, but you chose to be ‘Katrina Kapoor’!”

Here is what Salman Khan Said —

What are your views on relationship between Salmaan and Katrina?? Do you think that Salman Khan will ever get married??
Do tell us your views in comments…

10 Computer Games We Have All Played When We Were Young!
Chaar Sahibzaade Breaks All Records – Becomes Highest Rated Movie Ever In IMDB History