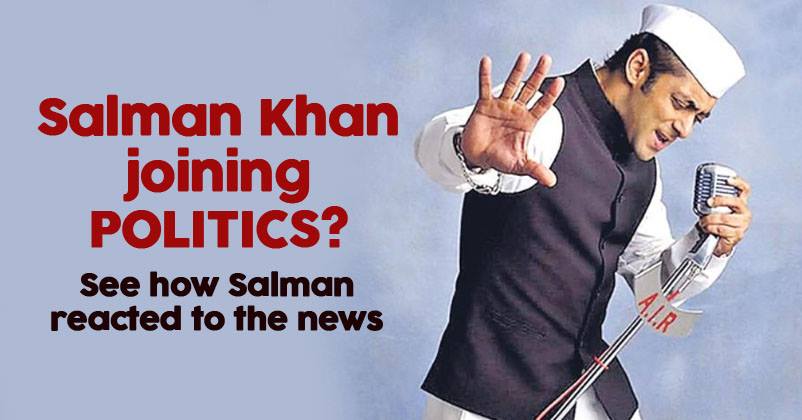 The biggest festival of democracy, i.e., Lok Sabha elections, is going to be celebrated in India very soon and each party has started its search of star campaigners. The Bollywood celebs are among the favorite choices of the political parties as they have the capability of attracting big crowds for their rallies.

Salman Khan is one of the biggest actors of India and any party would love it if he campaigns for them. In fact, there were reports that Salman may campaign in support of Congress party in Indore which is his hometown. The spokesperson of MP Congress unit, Pankaj Chaturvedi has said that their leaders have talked to the “Sultan” actor and there are pretty good chances that he is going to campaign for them in Indore.

Not only this, there were rumours that Salman Khan may also contest elections but the confusion was soon cleared by the actor himself when he took to Twitter and wrote that he is neither campaigning for a party nor contesting elections.

This is what the actor wrote, “Contrary to the rumours I am not contesting elections nor campaigning for any political party..”

Contrary to the rumours I am not contesting elections nor campaigning for any political party..

Earlier when PM Narendra Modi tagged Aamir and Salman in a tweet and asked them to motivate youth to vote, the “Dabangg” star tweeted, “We are a democracy and it is every Indian’s right to vote. I urge every eligible Indian to exercise your right and participate in making the Government.”

We are a democracy and it is every Indian's right to vote. I urge every eligible Indian to exercise your right and participate in making the Government. https://t.co/WsTdJ3w84O

Salman Khan has wrapped up the shooting of his movie “Bharat” which is the remake of a Korean movie. The film is being directed by Ali Abbas Zafar and other than Salman, it also stars Katrina Kaif, Sunil Grover, Nora Fatehi, etc.

Vicky Kaushal Called Deepika ‘Bhabhi’ At Zee Cine Awards. This Is How Deepika Reacted
Shraddha Kapoor To Tie The Knot With Rumoured Boyfriend? Here’s What Shakti Kapoor Has To Say