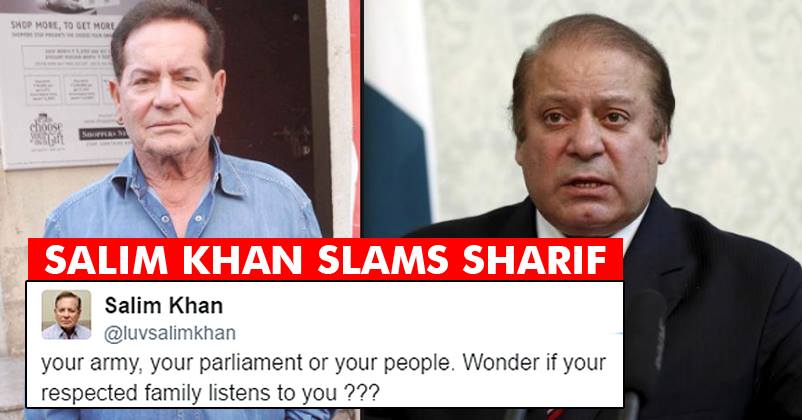 The Uri terror attack which claimed the lives of 19 soldiers has made every Indian very furious. Pakistan’s Jaish-e-Mohamed is blamed for this attack and everyone right from common man to celebrities and politicians are slamming the government of Pakistan for the same. Latest to join the club is Salim Khan, Salman Khan’s dad. 2 days after this attack, this popular Bollywood scriptwriter took to Twitter and slammed Nawaz Sharif, the PM of Pakistan for this brutal attack.

Salim has held the PM responsible for whatever has happened and also pointed out how no one i.e. the people, parliament or Pakistani army listens to him.

He made a very strong statement and said that if no one in Pakistan is paying a heed, how can Nawaz Sharif go around complaining about India in the International Forum and expect them to hear him out. Salim Khan left a series of tweets and lashed out at him. Have a look…

Firstly he commented on his name!

1/4 Beg your pardon Mr Sharif, If people those who gave you your name knew what your characteristics would be,

It must be Be-Nawaz Sharir!

they would have named you Be-Nawaz Sharir.A big blunder has been comitted. Its your own admission that no one listens to u in Pakistan be it

your army, your parliament or your people. Wonder if your respected family listens to you ???

Ironic then that you are going around the world complaining about India. Is anyone listening ??

Presently, Nawaz Sharif is in New York, attending the United Nations General Assembly wherein he has to highlight the violations of human rights by India in Kashmir. Salim Khan has given him the perfect answer and made him realize that ‘NO ONE IS LISTENING’. Don’t you agree to his statements? Do share your views in our comments section below!