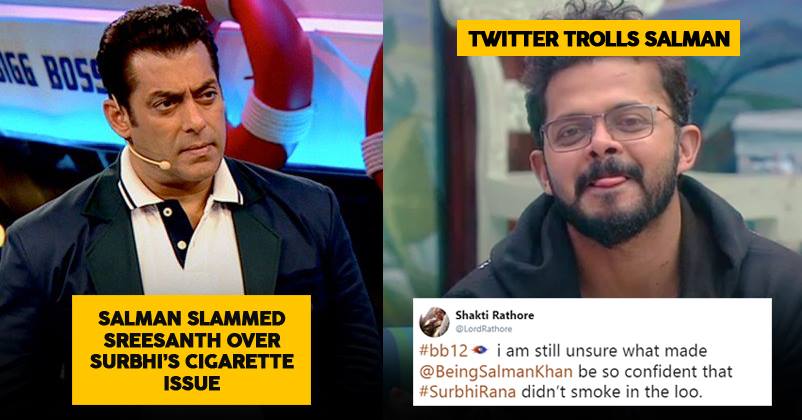 Big Boss 12 has slowly risen in TRPs, creating one of the biggest shows on air currently. The house is in chaos due to the recent Captaincy task and the politics that followed. Deepak’s manipulative strategy helped him win the nomination for captaincy but alas he lost the prize to Shivasheesh in the final task. And after all this, yesterday’s weekend ka vaar was a huge blow to the housemates as well as the audience.

This whole scenario turned ugly late Friday evening when Sreesanth and company (which included anoop and jasleen) decided to falsely create a reason of nominating Surbhi. The reason being that Surbhi had smoked in the Big Boss’s bathroom to which Jasleen had objected a few weeks earlier. Anoop and Sreesanth had seen the same during their time in the outhouse, and so a scene was created. Long story short, Surbhi ended up having something close to a panic attack while trying to prove her innocence as the conspirators laughed in the background.

Salman Khan yesterday, ended up showing the footage and proving it to the people that the whole scenario was falsely created to corner Surbhi. Sreesanth ended up being slammed by Salman for his lack of sportsmanship and egotistical approach to the whole show. Fans of Sreesanth were not happy about this and Twitter exploded. In a turn of events, many fans have termed Big Boss and Salman as biased for supporting Surbhi as Sreesanth according to them, has been through a lot.

Here’s what most of them had to say :-

Bigg Boss is about Surbhi
Or it is about Romil….
Rest of the members are either wrong or are bullied….
Entertainment nhi sentiments Ko hurt krna is good #SrishtyRode an entertainer is nt shown
If Shree said about the payments….wht Surbhi said ws all ok????#BigBoss12

Correct . #bb12 look like totally fake&scripted show. @BeingSalmanKhan don't take proper stand his attitude like aao,paisa lo aur nikalo.and I also found to much biasedness towards shilpa in bb11.
I think that that's end of golden era of #BigBoss.Lose credibility.What you think?

#bb12 i am still unsure what made @BeingSalmanKhan be so confident that #SurbhiRana didn’t smoke in the loo. Is there an exclusive camera there for hosts and crew ??she rushed out,told #JasleenMathru 2shush! N sprayed so much deo it would make anyone doubt #bigboss12 @BiggBoss

@BeingSalmanKhan haha.. Surbhi surbhi Surbhi… bhai ye dikha rahe ho ki you respect women…we all know that 😂 she cut her finger.. abused and she made ruckus of falsely being blamed for smoking.. yup she smoked and its apparent in video #bigboss12

@BiggBoss seems like surbhi smoked but acted smart by saying first ki who kept these tissues other wise she wouldn't smell this much of cigrette #BigBoss12 lookin' like saving surbhi for no genuine reason! too much of fakeness!probably no more watching biggboss although was a fan

Did you see last night’s episode? What did you think about it? Do you agree with them? Share your thoughts with us in the comment section below.

Third Day Collections Of Badhaai Ho & Namaste England Are Out. Badhaai Ho Is Unstoppable
Most Valuable Nation Brand 2018 List Out. This Country Topped The List