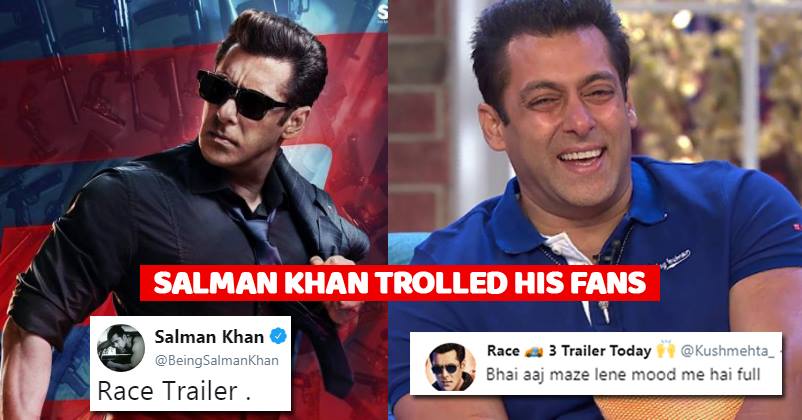 Salman Khan is all set to launch the trailer of Race 3 today at around 4.30 pm. After we saw the posters of the film, we were impatient for the trailer launch.

The much awaited trailer is going to be filled up with action sequences. Since morning, the trend of #Race3TrailerDay is going on & Twitter is filled with loads of tweets from Bhai’s fans.

However, Sallu Bhai seems to be a in a mood to troll all his fans. He shared the trailer of “Race” on Twitter but unfortunately, it was “Race 1” and not “Race 3”.

While sharing the trailer, he wrote the caption “Race Trailer” which made the fans to believe that it’s Race 3’s trailer. Many of them were fooled and only after they clicked they realized that it’s the original Race 1 trailer.

As soon as Twitter realized this, they had fun with Salman. They enjoyed his sense of humor and gave mixed reactions.

We loved Salman’s amazing sense of humor. The way he engaged fans and trolled them is simply awesome.

Continue Reading
You may also like...
Related Topics:Race 3, Salman, trailer