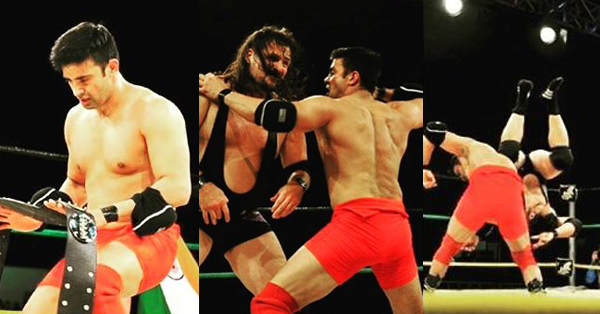 Sangram Singh has not been into professional wrestling since three long years but as it is said a Lion never forgets to hunt down its enemies even though it is out of practice. The same thing applied to this Lion Sangram Singh who with his confidence & strong determination managed to clinch the title even after 3 years.
Sangram after the win tweeted about his win along with his picture with the title belt, thanking all his followers and well wishers.

As per the deal Sangram had to sign a Death Contract before he could take up the fight. As per the contract the organizers are in no way responsible and owe no responsibility if the fighters engage themselves into fatal injuries. But Sangram came back with even stronger determination and put the competitor to a near death situation.

This is not the first time he has made India Proud, take a look at his previous achievements which are commendable:

4) Gold in All India Open Wrestling Competition in 2007

Cheers Sangram!! You made all of us proud.