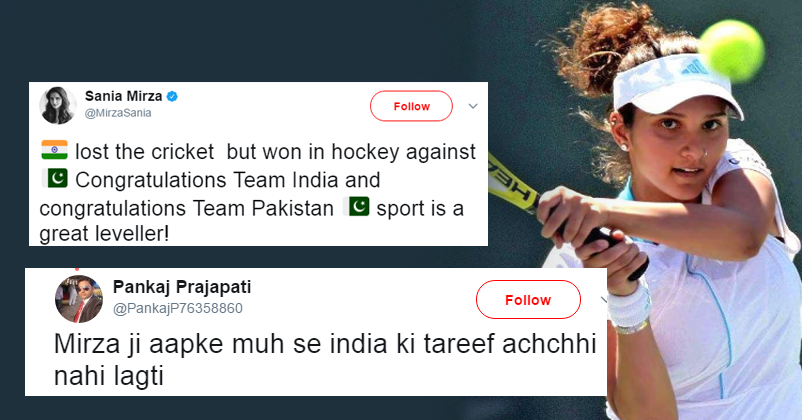 A couple of days ago, Sania Mirza was brutally thrashed on Twitter after she congratulated India and Pakistan both for victory in hockey and cricket respectively. As we all know, she married Pakistani cricket player Shoaib Malik. After her tweet, netizens slammed her for being diplomatic and people asked whether she wasn’t happy for her husband Malik’s win.

There has not been any response of hate tweets from her side so far. However, in a recent interaction with media, she has finally opened up on trolls and you will become her fan (if you are not yet) after knowing her thoughts which are above and beyond hatred. The woman certainly deserves a big round of applause for her viewpoint and it will change your thinking too!

Well, if trollers ever thought that they hurt Sania with their derogatory and detestable remarks, they had wasted their time and energy, as all this spitefulness barely had any impact on her.

“I’m pretty numb to them. It is very easy to sit and judge someone from the outside and, honestly, I feel sad for the haters. I don’t have that many – it’s probably 20 percent haters and 80 percent good – but it’s still a large number of people. I feel sad for them that they have so much hate for a person they don’t even know. To have such a strong dislike toward someone you have never met or have no idea about, and who you’re so irrelevant to – you’ve got to be really miserable.” She had been to the UK for watching ICC Champions Trophy 2017 as well as supporting Shoaib Malik. Sania says that people need to understand that a game should be played with the sportsman spirit. It should not be a matter of life and death or war. In her words,

“I support my husband, of course, but I support India, too. It’s not as dramatic as people want to make it sound. They think we are at each other with knives every time India plays Pakistan. It’s not like that. We have to remember it’s sport. That’s the message every athlete wants to put across. It doesn’t matter. When India lost to Pakistan, they lost a game of cricket, that’s the bottom line. It’s not war, a matter of life and death.”

She further talked about the spirit of sport which was definitely there among the players of both the nations, as she says,

“There were some amazing visuals the ICC put out after the match: my husband was talking to [India players] Yuvraj Singh and Virat Kohli, sharing a joke. It was 10 minutes after the match, before the presentation ceremony. That is the spirit of the game.”

The 30-yr Tennis player tells people about the similarities between India and Pakistan,

“India and Pakistan are so similar: we speak the same language, eat the same food, most things are the same. They [the teams] actually get along with each other as well as, or probably better than, with other people because the cultures are so similar. I find it absurd that people can’t understand that, but maybe if you don’t play a sport it’s tough.”

Sania is of the opinion that one should “stay true” to oneself. Even though she accepts that she often gets angry or irritated by several messages, she prefers to ignore them. According to her,

“It doesn’t really matter what a random guy sitting 5,000 miles away is saying to me. I don’t take anything to heart, whether it’s good or bad, because neither of them lasts.”

We fully agree with you Sania!

Remember Pak Fan Who Made Shami Angry With “Baap Kaun Hai”? Here’s What Indian Fans Did To Him!
Finally Some Good News For Kapil Sharma! This Comedian Has Joined TKSS Once Again!