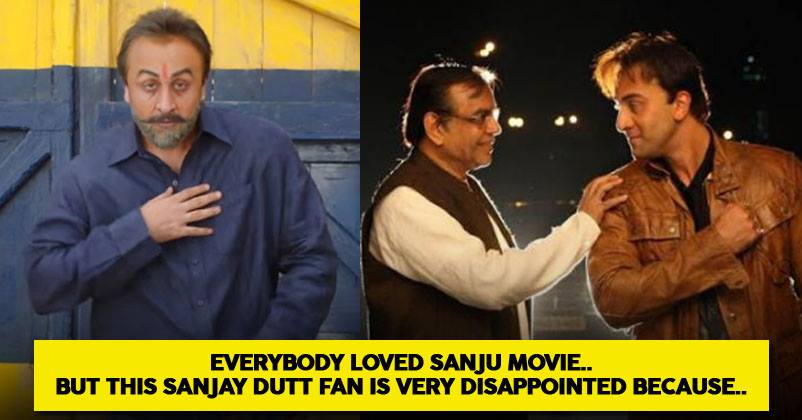 Sanju is enjoying a good run at the Box Office. Ranbir Kapoor has essayed the role of Sanjay Dutt brilliantly and is garnering lot of appreciation for the same.

Sanju is not only minting good collections but is also winning hearts. It portrays Sanjay Dutt’s life filled with ups and downs. The film also shows how the actor struggled alone without any assistance.

Fans are simply loving it, but there’s one crazy fan of Sanjay Dutt Suraj Rajouria who is extremely disappointed with the movie. Yes, he is not at all happy with Sanju & he explains the reason behind it.

“I thought I was the biggest Sanjay Dutt fan till I grew out of school went to hostel and met people from various parts of the country, smaller ones, and boys who had stories of how they tied bandanas and carried hockey sticks to watch Sadak (1990) or how they walked out of Saajan (1991) just before Sanjay Dutt gives Madhuri away to Salman Khan as a sacrifice because in their minds the film ends with Dutt driving off into the sunset with Madhuri. I realized this man is a phenomenon.”

“What should have been a film about the man and his life became a soapy father-son saga. It felt more like a Sunil Dutt bio-pic. I understand that when you choose to tell a story of a man’s life, even if it is “inspired by true events” and not a bio-pic, it is the story-teller’s prerogative to choose to include and exclude whatever he / she feels is the best tool to tell the story.

As a fan, though I think I deserved to know about Richa, and his supposed treatment to her. His first daughter Trishala was completely left out, along with his second wife Rhea. They had got married on a whim on Valentine’s Day. Sanju sleeping with his best friend’s fiancee was passed off in humour. What happened to the bro code of a man’s man? The poor friend remained single forever.

It would have been great to include his comeback in the form of Naam or how he bagged Vidhaata after supposedly Sunil Dutt had to request filmmakers to cast his now free from drugs son and how that film became a massive hit. Some scenes during the making of Sadak and Khalnayak, would have been so intriguing to watch but no they chose to show how Munnabhai MBBS got made instead, another landmark film in his career nonetheless.”

Adding further, Suraj says, “In the end, Sanju does redeem himself (in what I think is the best moment of the film) when he says “Dad, you deserved a better son”, but alas! that is spoilt by the dialogue too culminating in “but no son could have loved you more than me”. I know any criticism of the film is null and void and totally pointless. The film is well on track to score a net box office of a whopping 175 crores and a record breaking lifetime collection. Har maidaan toh fateh kar hi liya … (this song only reminds of me of that shot where Sanju propelled by the great Nargis’ ghost, makes it to the top of the peak ala Stallone’s Rocky.)

The movie has been a colossal disappointment for the Sanju that I love, and follow since I was a little child. His real story deserved to be told, sans the whitewashing. All is well though.”

This fan might be having a completely different point of view about the film, but it shows how much he loves Sanju.

Dancing Uncle Is Back. This Time He Chose Hrithik Roshan’s Famous Song
6th Day Collections Of Sanju Are Out. It’s Too Close To 200 Crore Club